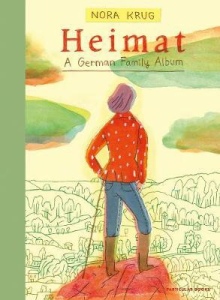 I am so glad that Particular Books chose not to translate the title of this book. Home might be where the heart is, but not necessarily without complication. In Heimat, Nora Krug’s graphic investigation into her own family’s difficult past, the definition is given as: 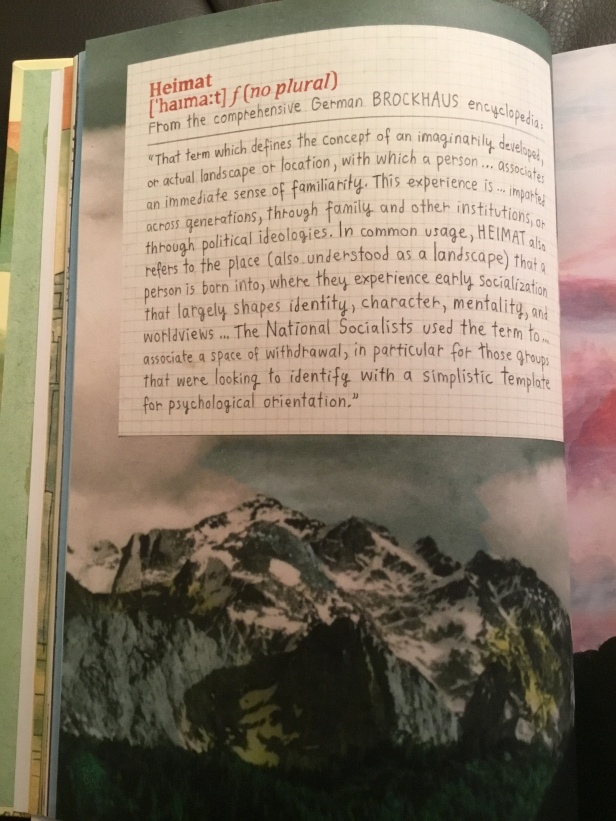 The English word Home just isn’t as comprehensive as that. Another word that doesn’t really translate is Vergangensheitsbewältigung. Literally coming to terms with one’s political past. For Nora Krug, a post-war 2nd generation German, it means struggling to come to terms not just the collective guilt, but the specific roles her own family members played. And that’s understandable. How does one manage it? It’s not a question I’ve ever dared ask any of my German friends, and it appears that in Krug’s case she had no curiosity until …. Well, I’ll let her answer that. 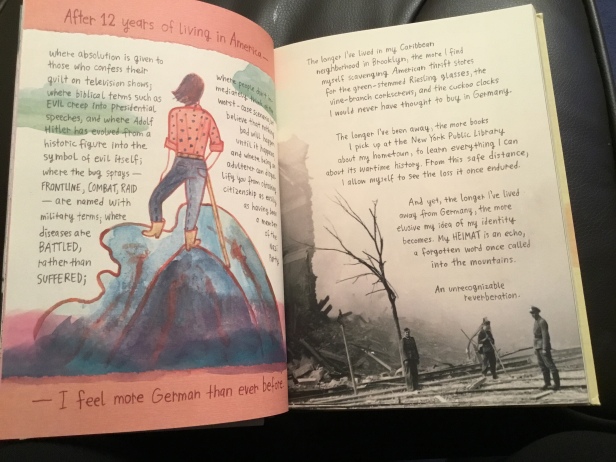 Not even marrying a Jewish man has lessened my German shame, she says. How do you know who you are, if you don’t know where you come from?, she asks. And so her search begins. It is an act of bravery, because she has no way of knowing what she is about to uncover.

She starts with a childhood memory of visiting an Italian graveyard for the German fallen, and her father’s searching for his brother’s grave, the brother who had died before her father was born and whose name he inherited. This 18-year old Franz-Karl is going to haunt the whole narrative. To what extent did having a son in Hitler’s army indicate her father’s family support for the Nazis? And what about her mother’s side? The questions that arise in relation to her grandfather, Willi, are not straightforward, and the answers not always what she wants to hear.

She visits relatives on her father’s side, despite a long standing estrangement, to discover the older Franz-Karl. She finds a school notebook, containing an anti-semitic essay entitled The Jew, A Poisonous Mushroom, written by the 12-year old being educated in the Nazi system. Put into context …

She tells the local histories of the Jews in Karlsruhe and Külsheim, and tries to imagine what her relatives were doing at decisive moments such as Kristallnacht. Were they observing? Partaking? Did they know what was happening in the concentration camps? How did they fare during the denazification process? Does what they tell the authorities agree with the details recorded in the pictures from the family album?

This is an intensely personal investigation and you can feel the author’s nervousness at key moments in her search. The pictures I’ve included give a feel for what really has evolved into an extraordinary and quite beautiful German Family Album. (Again kudos to Particular Books for keeping this subtitle. Other editions change it quite unnecessarily in my view.) Krug integrates facsimilies of Franz-Karl’s notebook, pictures of official documents, newspaper cutouts, photo montages together with her own cartoons and impressionistic drawings into her text. Included also is a series from the notebook of a homesick emigré (her own I assume). These notes made me smile and nod in vigorous agreement for I, too, miss the forests and the bread. Though, I suppose it takes a bone fide Deutsche to feel nostalgia for Hansaplast and Uhu glue!

Heimat was my final read for German Literature Month VIII, a case of saving the best till last. I’m assuming it was originally written in German and translated by the author herself (because there are no translator credits to be found). If it wasn’t, it breaks #germanlitmonth’s one and only rule. But you won’t get anything more German than this, proving the age-old adage that rules are made to be broken!