Is it officially a trend? There seem to be an awful lot of Japanese crime novels around and about these days, and, if the two I’ve read recently are anything to go by, long may it continue. 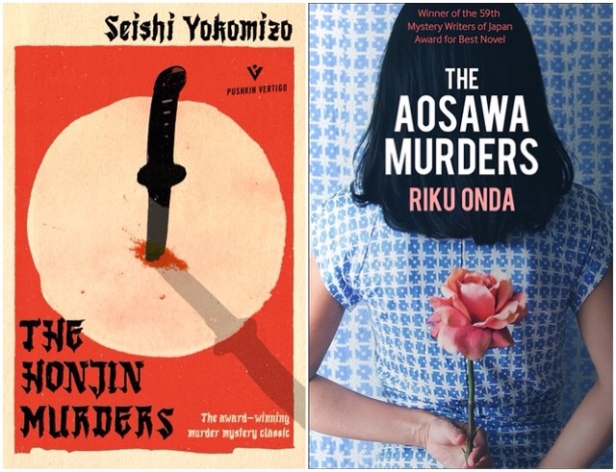 Both of these novels won the Mystery Writers of Japan Award. Yokomizo’s The Honjin Murders (1947) was the inaugural winner in 1948, and Riku Onda’s The Aosawa Murders (2005) in 2006. They are very different stylistically, but both are very enjoyable.

The Honjin Murders (translated by Louise Heal Kawai) is your classic locked room mystery, and the setup of this locked room is so complex, it needs a map! The victims are none other than the heir of the grand Ichiyanagi family and his bride, who are both killed on their wedding night. As for the method, it’s horrific and it could only happen in Japan.

In fact, the novel is very illuminating about Japanese culture, customs, and class structure of the 1930s. So too regarding classic crime fiction. I think I read that The Honjin Murders was the first Japanese locked room murder mystery, Yokomizo importing the form he loved. So it’s full of the tropes you’d expect: the locked room (of course), the red herrings, and the detective who sees and understands everything way ahead of everyone else. Now I’m not a fan of detectives of that kind (Sherlock in particular), but I have to say that Kosuke Kindaichi has a humility that Sherlock lacks. Pushkin Press are publishing another Kosuke Kindaichi mystery later this month. The Inugami Clan is the sixth in the original series. It will be interesting to see if Kindaichi retains his scruffiness and humble attitude …

But back to The Honjin Murders. Yokomizo acknowledges his debt to the writers who preceded him by weaving multiple intertextual references into his work. These references are more important than hommage, they are key clues. And if I’d read more of the works in question, I could probably have kept pace with the detective. What I did understand is that Kindaichi gets his major break while browsing a bookshelf full of classic crime novels … Don’t you just love it!

The story is told in retrospect by a visitor to the village of Okamura, who became obsessed with the cause celèbre of the place. Retrospect retelling is also used in The Aosawa Murders (translated by Alison Watts) but where Yokomizo’s single narrator tells the whole story chronologically from beginning to end, Riku Onda’s structure presents a much more complex puzzle, which the reader is asked to resolve.

You could say we’re moving from locked room to open house mystery. Because, during a large birthday celebration at the Aosawa residence, to which relatives and neighbours alike are invited, 17, including 6 children, are killed by drinks laced with cyanide. There are only two survivors, a servant who drank a small amount of the poison, and the Aosawa’s daughter, Hisuko, who escaped unscathed. At one point Inspector Teru says something along the lines of “If only one member of the family survives, there’s no need to look any further for the culprit”. The problem is Hisuko Aosawa is blind. Is it as simple as that? What motive would she have? How could she have laced the drinks?

10 years later, Makiko Saiga, a neighbour who arrived at the house, to find people scattered everywhere, writhing in hell, publishes a book about the murders. The police have resolved the case, but she is dissatisfied with the result. She writes the book following a series of interviews with connected people; the detective, the family of the poisoned servant, her brothers who were with her at the time, etc. These interviews are what Onda presents in her novel. Saiga’s conclusion is somewhat different from the official wrap-up, but has she got it right?

Years after the publication of Saiga’s book, the girlfriend of her younger brother begins the same process. I won’t say why, but it emphasises one of the themes: the ripple effect of serious crime, effects of which continue to be felt years, if not decades, afterwards.

I will say there is some seriously strange behaviour in these pages; some of the strangest coming from Makiko Saiga herself, who had an obsession with knowing how it felt to be in another person’s shoes.

Anyway, the interviews, not always presented chronologically, are a form of jigsaw, which the reader must piece together. The truth is nothing more than a subject seen from a certain perspective, says the man who helped transcribe the interviews for Saiga’s book. But which truth? Which perspective? I did put the whole picture together in the end, but the corner pieces took some finding!

One thought on “Yokomizo and Onda, a prizewinning Japanese Crime-Writing Duo”