I only took one day trip to the GDR, but I have often travelled to former East German territory since reunification, and discovered some wondrous places; one such being Schwerin in Mecklenburg-Vorpommern, only 2 hours by train from Hamburg. A little known jewel, a city with twelve large lakes, a glorious castle, an atmospheric old town, and a great little second-hand bookshop. (I must go back one day.) I don’t normally rummage in boxes of bargain books. But I might, particularly when books are priced at €1. That was the case on the day when this little matchbox-sized book positively jumped into my hands! 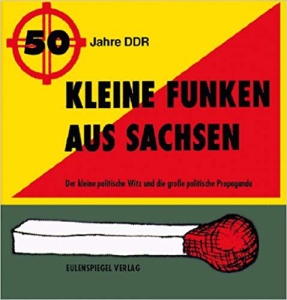 The “little sparks from Saxony” are political slogans which were printed on the back of matchboxes in the GDR. Over 60 of these are reproduced on the right-hand pages and each one is accompanied by a joke from that time on the left. I’m not sure if these are Western jokes about the GDR or actual East German jokes They might very well be the latter, because Peter Millar shows that both self-deprecating and subversive jokes were told in his local pub in East Berlin. Wherever they came from they tickled my funny bone.

Here are translations of 3 of my favourites. Beware, they are jokes of their time and may not meet contemporary standards of political correctness. 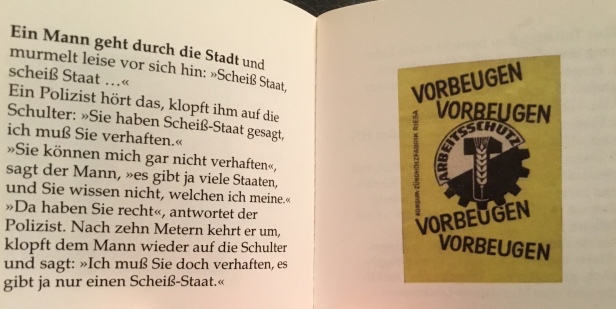 A man is walking through town, muttering to himself, “Shitty state, shitty state …”

A policeman hears him, and taps him on the shoulder. “You said shitty state. I have to arrest you.”

“You can’t arrest me”, says the man. “There are many states. You don’t know which one I mean.”

“You’re right,” says the policeman and walks away.

Ten metres down the road he turns around, taps the man on the shoulder again and says, “I do have to arrest you. After all, there is only one shitty state.”

Slogan: Flying is always a pleasure.

Three experts are discussing the possibility of landing on the sun.

The American scientist: “We’ll be able to do it in about 15 years”.

The Soviet citizen: “We working intensively on the space station, that will launch 3 years from now.”

The representative of the GDR: “We’ll launch next week.”

“We’ve solved the problem of the high temperatures on the sun’s surface.” 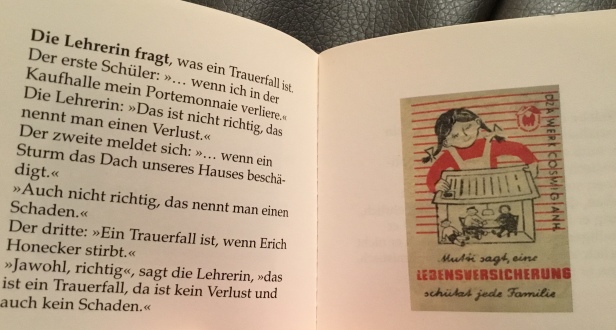 A teacher asks, what is a bereavement

1st pupil: “When I lose my purse in the department store.”

Teacher: “That’s incorrect. We call that a loss.”

2nd pupil: “When a storm damages our roof.”

3rd pupil: “It will be a bereavement, when Erich Honecker dies.”

Teacher: “Yes, correct. That will be a bereavement, but there will be neither loss nor damage.”