German Literature Month V opens with Schiller reading week. But who was this Schiller? He is the playwright voted the most influential after Shakespeare by the audience of the TV channel Arte in 2008; an  accolade proving this 18th century wordsmith still has things to say to us in 2015.

Johann Christoph Friedrich von Schiller (Fritz to his family) was born (without the von) on 10 November 1759 in Marbach to an army recruitment officer.  His parents, intending him to become a pastor, ensured he was taught Latin and Greek.  Later, his intelligence caught the eye of Carl Eugen, Duke of Württemberg, who decided to educate him at the Karlsschule, his elite military academy.  Schiller eventually studied medicine there.

He married Charlotte von Lengefeld in 1790, but there were many C’s in his life: her sister Caroline von Wolzogen (who wrote the first biography of Schiller in 1830),  his early love and the woman who never really stopped loving him, the married Charlotte von Kalb.  Also Carl Eugen, Duke of Württemberg, who educated him and Carl August, Duke of Saxe-Weimar, who elevated him to the realms of immortality.

10 years prior to his marriage, he was working as a regimental doctor in Stuttgart, which he hated. Having completed his debut play, The Robbers, he took out a loan to publish 250 copies.  (Yes, even Schiller had to self-publish!)  In 1782, he went absent without leave to attend the opening of The Robbers in Mannheim.    The  play, a stormy and stressful affair, caused a sensation, and not only amongst the audiences. Carl Eugen was not amused and he banned Schiller from ever publishing anything ever again! This ultimately led to a complete break, with Schiller fleeing the Duchy of Württemberg in September 1792.

The loans taken to publish The Robbers were the first in a series that were to plague Schiller’s early career. It wasn’t until he arrived in Weimar in 1787, with the patronage of Carl August, Duke of Weimar, that life  began to settle. There he was ennobled, becoming Friedrich von Schiller in 1802.

Perhaps the most influential friendship in German literary history was formed in Weimar, Schiller’s friendship with Goethe.  Though it’s fair to say that, at first, the older man, who wasn’t at all keen and actively avoided meeting the young upstart.

I avoided Schiller, who, while in Weimar, lived in my neighbourhood.

Goethe couldn’t avoid him forever and made his acquaintance in 1794.  A friendship developed and following the publication of The Fall of the Low Countries (1788) and The 30 Years War (1791-2) Schiller was, with Goethe’s support, appointed Professor of History and Philosophy at the University of Jena.

Not that his academic career interfered with his imagination in any way.  In his two classical dramas, The Maid of Orleans and Mary Stuart –  both published 1800/1801 –  historical fact does not impinge on dramatic requirement.  In the first Joan of Arc dies in battle (not burnt at the stake as a witch) and in the second, the emotional, political and dramatic climax is a meeting between the two queens, Mary and Elizabeth, a meeting that never took place.

Without Christian Gottfried Körner Schiller may have sunk into debt-ridden obscurity.  Schiller and Körner became friends in 1784, and, when Schiller’s debts threatened to overwhelm him, he fled to Körner spending some time on his estates in Loschwitz in Dresden.  Körner bankrolled Schiller on may occasions thereafter, never ceasing to encourage and discuss Schiller’s literary and philosophical concepts.

Many of those discussions have been preserved in their correspondence.  Schiller was an inveterate letter writer, particularly adept at writing begging letters.  (More on these later in the week.)

This skill was a matter of survival.  Schiller’s early career was a hand to mouth affair, particularly when in 1784 his one year contract as director of the Mannheim National Theatre was not extended.

Schiller’s only novel, The Man Who Sees Ghosts,  remained unfinished.  Unlike his ballads and plays, many of which were adapted and turned into opera.  The most famous musical piece has to be this section of Beethoven’s 9th symphony which incorporates Schiller’s Ode to Joy, which he dedicated to the aforementioned Körner.

Professor Schiller (as he would have been known to his students in Jena) taught history and philosophy. Amongst the philosophical concepts important to him were Wieland’s Die Schöne Seele (the beautiful soul), human freedom and das Erhabene (the sublime) or the ability for human to put aside their instinct for self-preservation and sacrifice themselves for higher ideals. 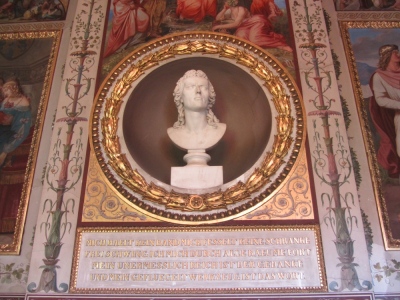 Schiller cries freedom! “No ties bind me. / No bounds chain me. / I fly freely through space. / Thought is my immeasurable kingdom and words are my winged tools./” Rough translation my own.

All of which is extremely laudable, and yet  Schiller’s actions were sometimes questionable. He didn’t always repay his debts, he had an affair with a married woman, and there may or may not have been a ménage à trois with his then future wife and her sister!  An assured fact is that he was less than pleasant towards Goethe’s partner, Christiane Vulpius.  The story goes that while staying with Goethe for two weeks in 1799, Schiller never spoke to Christiane, nor sent a word of thanks when he left.

Not that Weimar society would have criticised him for that – the Goethes didn’t marry until long after Schiller’s death.  Nevertheless Schiller wasn’t without his contemporary critics.  The German Romantics were less than impressed with Schiller’s idealism.  Caroline Schelling (another C!) once noted: Last night we almost fell off our seats laughing at Schiller’s poem Song of the Bell.

Sturm und Drang (Storm and Stress) was all the rage when Schiller began writing, so he was a latecomer to the movement.  Yet his early dramas – The Robbers, Fiesco, Passion and Politics and Don Carlos are now recognised as prime examples.

The Thalia (1784-1791) was the first cultural magazine edited by Schiller. In 1795 he set up a monthly periodical – Die Horen – which published pieces from all the great names in German literary circles of the time (including those pesky Romantics.) Another less known string on Schiller’s bow was his translation work.  Do you recognise this piece from Shakespeare’s Macbeth?

Demetrius was Schiller’s final play – it was unfinished at time of his death from tuberculosis on 9th May 1805. A page remains on his desk in Weimar to this day.

The emotional pitch of Schiller’s text may be hard to swallow these days, but he couldn’t half write a good villain! Franz from the Robbers, The Duke of Alba from Don Carlos spring immediately to mind.

Following his decade in Jena, Schiller returned in 1799  to Weimar, where that friendship and collaboration with Goethe grew ever closer resulting in the golden age of Weimar Classicism and the founding of the Weimar National Theatre, where the two of them preside to this day.

Before that, however, they penned The  Xenien, a series of wicked satirical epigrams designed  to answer their literary and philosophical foes and critics. They didn’t hold back!

If you had imagination, and wit, and sensitivity and judgment

Really you would not lack much for being like Wieland and Lessing.

When Schiller died, he was a relatively young man of 45, at the zenith  of his career.  Goethe was grief-stricken and penned an Epilogue to Schiller’s Song of the Bell.  (I doubt Caroline Schelling fell off her chair laughing at this.)