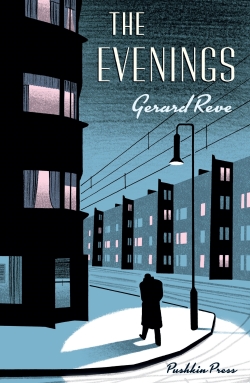 Translated from Dutch by Sam Garrett

It is a cause for celebration.  It doesn’t matter whether I enjoyed it.  Does it?

At this point, I wonder how to approach the it’s-not-the-book-it’s-me review …

Because if you look at the literary comparisons that have been made with Camus (can’t stand him) and  Knausgaard (just does not appeal),  you have to wonder why I was so keen to read this. In a word, nostalgia.  The fact is, many moons ago I read it in Dutch.  I know I did – I read everything on the syllabus of my Dutch course (yes, even Multatuli) but I have no memory of it.  Perhaps I struck it from memory because even then it didn’t sit too well with me … Or come to think of it, it was more likely a dreaded DNF.  At least I finished it in English.

So now that I have declared myself, I’ll tell you about the book and let you decide whether you’d like to give it a spin. Actually I should just let Tony tell you about it, because he has much more patience with this type of novel.

It’s 1946 and Frits van Egters, a 23-year old bachelor, is still living with his parents, who drive him crazy with their petty squabbling. He has a boring office job and there is no end in sight.  He lives for the evenings, which he spends mostly wandering the cold streets of Amsterdam, or chatting with his mates in their homes, or occasionally going to the cinema or the dance hall.  There’s no girlfriend, and, probably, no chance of one given Frits’s candour and  lack of diplomacy. (I’ll come back to that later.)  He is truly stuck in a rut.

The novel is structured over 10 days and nights and each day breaks down into time spent in the parental home, time spent outside either alone or with his mates, and time spent sleeping and dreaming.  (Dreams in fiction  – there’s another pet hate of mine.) There’s little said about the office, because there is little to say.

I work in an office. I take cards out of a file. Once I have taken them out, I put them back in again. That is all.

Everything is told in 3rd person but from Frits’s point-of-view – the minutiae of his mundane life, his thoughts, the long conversations anf his even longer dreams. There’s no plot as such and I would say no resolution, although Frits does make a minor concession to his mother at the end. (On New Year’s Eve, he humours her by drinking some cordial, which she had thought to be wine. Could this signal a truce on the home front?)

Yes, it’s bleak, bleaker still when you consider that it’s set during the festive season.  Frit’s loneliness smacks of desperation at times, buying 2 cinema tickets in the hope of finding someone to come with him.  But then, who can blame his friends for seeking the company of others? When he’s with them, Frits plays on their weak points, discussing their paleness, baldness, criminality, ad nauseam.  He’s a liar too. (Denying he had grassed up the petty thief Maurits.) I’d tag him as a wind-up merchant and avoid him.

And yet, he’s likely using attack as the best form of defence, to deflect from his own mania and distress.  Because this wasn’t an age of 24/7 entertainment on tap. How is a young man to pass the long dreary winter hours?   Books and radio will only go so far, when your father’s driving you completely round the twist with his slobby eating habits. Talking to Viktor,

“Affliction cometh forth”, Frits said in a solemn tone. …. “Porridge for dessert every evening .  My mother puts the sugar bowl on the table.  With a little spoon in it.   Everyone takes sugar from the pot with that little spoon.  What does my father do? He digs out the sugar with his own dessert spoon.  Still clean and unused, I’ll admit, but it drives me mad to see it, I’m going crazy!”

I must admit I chuckled there, and, in other places too.  For who has not been driven potty by a family member for something similar?

The human observation is sharp, the ennui palpable, and the dialogue entirely natural. Neither could Reve have found a more effective structure to stick the reader in a same rut as Frits.  Sam Garrett has, as ever, translated excellently.

To summarise, I can appreciate the literary merit of The Evenings, and I fully expect it to be a contender for the Man Booker International later in the year.  Though you won’t be suprised to hear that I don’t consider it the Best Dutch Novel of All Time. To that end I offer you this.