Translated from German by Judith Pattinson.

Once upon a time a  certain someone was browsing the German literature shelves in the wonderful Daunt Books in Marylebone, when one particular book bullied its way into my bookbag. It was staring me down!  Go on, I dare you to read me … 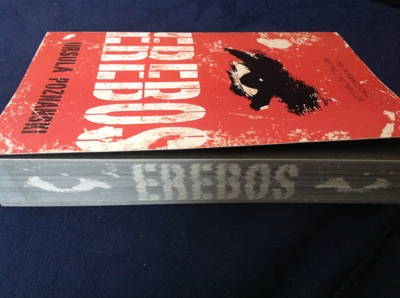 Well, having made its way home to the TBR mountains, Erebos waited patiently for a couple of years.  Priya reviewed it during GLM III, and once again I thought I really must take up the challenge.  Eventually I chose it for my GLM V  readalong title.  I really hope someone joins me today, because this novel is absolutely fantastic!!! (My favourite read this #germanlitmonth.)

Although it is a young adult novel and winner of the 2011 German Jugendliteraturpreis, Erebos was also proclaimed the 2010 Summer Thriller of the Year by the very grown-up weekly paper Die Zeit. So it has broad appeal, though I suspect it would not be for you if you don’t like computer games.

Something mysterious in the form of a flat package begins to circulate around Nick’s high school, but Nick cannot find out what it is.  Until one day, a girl with a crush on him hands him a package with strict instructions to discuss it with no-one.  Arriving home, he inserts the CD into his computer and begins to play the game, Erebos.  The instructions are clear – he must play only when he is alone and he must speak to no-one about the game, not even mentioning his game alias.  The game is addictive amd competitive.  Players are fighting to become part of an inner circle.  Promotions are gained only through gaming prowess or fulfillment of tasks set for them in real life.

Yes. The game is uncanny and bleeds into the real world.  It seems to know the players and it knows if players carry out their instructions to the letter.  It also causes divisions – those not in favour are seen as enemies – and the game seems intent on eliminating them ruthlessly.  People do get hurt.  Nick, whose goal is to reach the inner circle, is eventually given a malevolent instruction that he cannot in good conscience carry out.  His disobedience is punished, and he is shut out of the game.  Nothing he can do will reactivate it.

By this time, events in real life have turned sinister, with game opponents sustaining life-threatening injuries.  Nick joins forces with some anti-gamers to find out what is going on.  The sense of threat is palpable and the tension at times unbearable.  Clues are deciphered through mythological and geographical references in the game.  Then the one person in the school, who has never had anything to do with the game,  becomes inextricably involved in solving the puzzle, and it becomes clear why only those displaying utmost and unquestioning loyalty to the game’s messenger are admitted to the inner circle.

Highly imaginative, original and psychologically authentic apropos the motivations of  and the pressures on an adolescent mind. Paced to perfection.  My reading of it as compulsive as Nick’s immersion in the game’s alternate reality. My reaction on reading the final sentence? WOW!