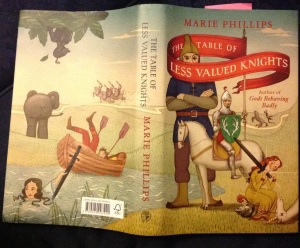 I was delighted to see this novel appear on the Bailey’s 2015 longlist.  I’d meant to read it on publication but then forgot about it.  How could I with such a colourful dustjacket?

Anyway my delight was compounded when I did read it.  It is everything that the dustjacket promises.

The seats at the round table in Camelot are reserved for the illustrious knights, as indeed are the Pentecostal quests.  Further back, away from the king, is a second table, reserved for the less-valued knights: those that have become doddery with age or inglorious through less than stellar performance.  They are not usually the questing sort although there are occasional and odd exceptions.

The exception here is very odd and involves Sir Humphrey de Val who effectively steals a quest from the Round Table when he agrees to help the lady Elaine find her kidnapped fiancé. They are accompanied by his squire, a little giant who rides an elephant, named Jemima.  It soon becomes clear that Sir Humphrey hasn’t got a scooby.  This quest involves nothing more than visiting the blacksmith in every village to determine who has recently purchased a black suit of armour. (It was the knight in black who absconded with Elaine’s fiancé.)  The pace picks up when a magic sword called Leila attacks Sir Humphrey.  Attached to the end of the sword is a young boy – actually Queen Martha of Puddock in disguise, who is fleeing from her marriage to a huge-toothed oaf named Edwin, and searching for her missing brother and rightful king

Thus do two quests collide and the result is a well-informed, hugely enjoyable and sometimes bawdy romp through Arthurian tropes populated by goodies (Queen Martha and Conrad, the little giant) and baddies ( Prince Consort Edwin and his brother, King Leo of Tuft), those with less than pure motives (Sir Humphrey and the Lady Elaine) and the downright confused (the Locum of the Lake “They needed somebody to cover. Usually I’m the Woman by the Well, and I started off as the Child at the Crossroads.”)  Pace and humour never flag and everyone gets what they deserve … apart from the poor unfortunate unicorn pictured bottom left on the cover (but at least his death isn’t gratuitous).

Look Who’s Back by Timur Vermes

Another fantastic example of cover art and a superlative book trailer.

You’d think I’d have rushed to read this immediately on publication.  No, I circled round it for months, worried about the ethics of turning a monster into an object of fun.  “It’s not what you think” said the translator, when I queried him about it at last year’s IFFP prize-giving.  And still I circled …. It took this year’s IFFP long-listing for me to open the cover and read …

And guess what, it wasn’t what I thought it would be at all.

Adolf Hitler wakes up on a piece of wasteland in modern Berlin, in full uniform, character and ideology undiminished.  He needs time to get his bearings, time granted him when a newspaper kiosk owner, mistaking him for an out-of-work method actor, gives him shelter.  Introductions to TV executives and a career in television follow.  Hitler is rocketed to stardom and, because of his persona, he can say things that others cannot., things that people secretly agree with. People marvel at his ability always to stay in character, always sounding like Hitler.  This leads to some unexpected and laugh-out-loud exchanges.

Kiosk owner to Hitler on first meeting : “I still don’t recall seeing you anywhere.  Have you got a card? any flyers?

“Don’t talk to me about the Luftwaffe”, I said sadly. “In the end they were a complete failure”.

There’s plenty of situational comedy as well as Hitler comes to terms with the technological advances of the modern world and realises their potential for disseminating propaganda – the internet soon becomes a favourite of his and he regales against the misuse of TV that is daytime television.  Much is said about the vacuity of modern day life as he is fêted as a superstar.

This in itself would make for a light and fluffy read,  However, in the second half, a darker undercurrent asserts itself.  The C21st Berliners may be blind to this but it is the real Hitler at work.  Back in the day he was completely underestimated, viewed as a funny, little man.  Nevertheless Hitler was cunning with a charm that won people over. Those patterns begin to re-establish themselves in the final pages of the novel and that is disconcerting.   I don’t think Vermes is saying that history could repeat itself but who knows?  There are lessons we never seem to learn.  He is on record as saying that Hitler didn’t do it alone and he wants the ordinary man, who made the Third Reich possible, to examine himself and ask how he would behave when given the choice of a strong, charismatic leader.

Translated from the Catalan by Peter Bush

Talking of the dark side, I have crossed over.  I never thought that the Kindle would be welcomed into this house, but needs must.  Time is doing what time does best, unfortunately, and heavy suitcases are becoming problematic.  I need to lighten my luggage when travelling this summer, and so it’s time to bite the bullet.  I thought I’d start with a collection of short stories from one of my completist authors. Happy to report that the experiment was a complete success!

Crazy Tales of Blood and Guts is a collection of 5 satirical short stories.  The pretensions of the art world are lambasted in Still Life No. 41 when what is take to be a life-size statue turns out to be something much more morbid. A Stitch in Time demonstrates that underestimating the elderly can be fatal. The restrained vampire (“I’ve not sucked the blood of young girls for years because I accept it’s not the done thing.  It’s a barbaric custom.“) at the centre of A Thought that Counts is quite a likeable fellow until he makes a spectacularly bad judgment call.  In The First (Pre) Historic Serial Killer , Mycroft, the cleverest troglodyte ever finds detective work a bit of a challenge, but in the process of establishing motive solves “three murders, and in one fell swoop invented prophecies, gods and oneiromancy”.  Flushed with success, he considers inventing psychoanalysis as well!  The final story, my favourite, is undoubtedly the most macabre. A pathologist becomes obsessed with internal beauty.  Performing, at her behest, a autopsy on the ugliest woman he has ever encountered (She was short and stout and her legs were too short and her torso was too long.  … As for her facial features, she hadn’t been let off lightly there either.  Flabby cheeks, bulbous nose, bulging eyes and greasy spotty skin ….), he discovers her organs to be of such sublime extraordinary beauty that he was continually forced to catch his breath. It is a contradiction he cannot resolve and over the following months he becomes obsessed with finding the perfect organs again .. until one night a pretty nurse from pediatrics finds herself cast in the title role of The Offering ….

I loved these stories.  They’re clever, witty and satirical by turns, inhabited by diverse voices, and I could happily have read a collection twice as long – even on the Kindle.  I hope more Solana is translated soon.  I only have one more novel of hers to read which I’m saving until something else is published.  I just can’t bear the idea of having no new Solana to look forward to.

5 thoughts on “A Miscellany of Comedy and Satire (from Marie Phillips, Timur Vermes and Teresa Solana)”