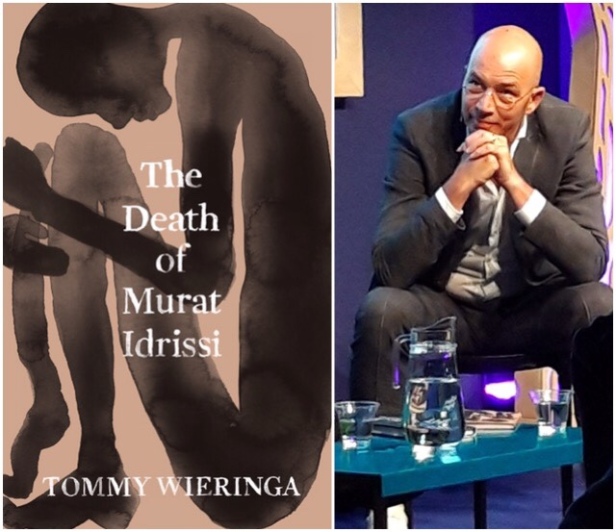 Like many a novel, it started when the author read the story of a courtcase in the newspaper. Two “stupid” (the author’s word) 19-year-olds were stuck with a car they couldn’t afford to bring home. So they took money to smuggle a man to Europe in the boot. Only he never made it, and the two girls were acquitted of murder/manslaughter because there was no body. (Apparently there are thousands of bodies found tossed by the roadside each year in Spain.)

Wieringa played with the idea of writing the novel, but decided against it. Then he saw the movie – a Dutch movie, a “ridiculous” movie. So bad, he decided to he could do better. The result is The Death of Murat Idrissi, 102 pages long.

Which he had plenty of time to reread as he sat on various trains for 14 hours to get to the festival. “I love the design of this book”, he said of the hardback published by Scribe. (Yes, it is a beauty.)

Short it may be, but it starts way before the beginning, back in the time when the continents moved apart, to emphasise the sheer beauty of Gibraltar and the 14km of water that lies between Gibraltar and Spain. “People try to cross this stretch in tyres”, he said.

The two daft lassies are Dutch with Moroccan descent. They are not treated well either in Holland or in Morrocco where they holiday and run out of funds. They find themselves dependent on a male guide, who convinces them that smuggling the young man Murat Idrissi is the best way to obtaining the funds they need to get home. One is all over the idea, the other, a bit more circumspect, lets herself be talked into it.

Murat Idrissi had lived in Europe before but was returned to his homeland. He’s a shy decent lad; his family desperate to send him back for the better opportunities that await him. Not for long though – the title gives his fate away.

Most of the novella concerns what happens next. The process that leads to events mirroring those of the court case. The girls are in quite a fix. Dumped by their guide at the first hint of trouble, they are still penniless with a corpse to dispose of. Their intention is not to dump him by the roadside, but what are their options? What leads them to their inhumane act?

There is a process that drives a wedge between them and the body, the process of decay, which is written so viscerally that I could almost smell the stench as I was driving along with the girls. “I was cool and distant when I wrote about the disposal scene”, said Wieringa. “Yet when I reread it today, I thought it quite gruesome!”

Was he worried about charges of cultural appropriation? No, he defends his freedom to write about anything he wants. (Three cheers from me for that!) However, due to having Moroccan family friends, he was nervous when writing and made a deliberate decision to keep things short au James Salter.

At the signing, I asked if he was sympathetic to the girls, particularly to the one with no conscience. “Yes”, he said, “there’s a resourcefulness about her that you just have to admire”.

The Death of Murat Idrissi is translated from Dutch by Sam Garrett.