Welcome to Krimi week at #germanlitmonth and to the next stop on my real life #gapyeartravels itinerary.  Yet, as one wanders round the haloed Goethe and Schiller infused streets of Weimar, a more unlikely place for dastardly deeds is hard to imagine.  And yet here we are with the final part of Köstering’s trilogy written in homage to Weimar and its most famous literary resident.

Part One, Goetheruh, centred around Goethe’s house in the Frauenplan with a plot based on Goethe’s poetry, in particular, the Erlkönig.  The Anna Amalia library and the very real fire of 2004 was the key site for book two, Goetheglut, with Goethe’s papers providing the necessary clues.  The heinous act in this final part takes place in that most iconic of Weimarian landmarks, the National Theatre with a plot based on Goethe’s play, Clavigo.

Interesting decision to mirror the plot on one of Goethe’s less popular tragedies. (Plot synopsis in German here.  Listen to it in English here.)  How is such melodrama going to translate into a 21st century plot line? 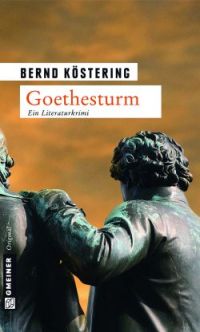 Moving forward 3 years from the events of Goetheglut, we are now in Weimar in the late autumn. (The onion market –  the reason for October’s visit – has been and gone.) The premiere of a new production of Clavigo at the National Theatre is only a few days away,  when the leading actress disappears off the face of the earth, and her second is hospitalised with a mysterious illness.  Fortuitously a stand-in is on hand – the wife of the man whose recently applied unsuccessfully for the directorship of the theatre.

Reinhardt Liebrich doesn’t help avert the fingers of suspicion by being a “Machtmensch” – a person who exercises power, holding all of his submissive acolytes in thrall – including Hendrik Wilmut’s cousin and childhood friend, Benno.  Benno has suddenly decided that local politics in Weimar is too small-town for him and decides to run for mayor in Frankfurt am Main at the expense of his marriage, if need be.  His motivation puzzled me.  It’s not clearly explained – mid-life crisis? blackmail perhaps?  – but his decision to dump his wife, who refuses to leave Weimar for Frankfurt (as would I, given the choice), provides the central conflict in the novel.

Actually it’s best not to know too many details of Goethe’s Clavigo because Köstering sticks very closely to Goethe’s plot and once you start identifying the modern day equivalents of Goethe’s characters, then the victims of events to come are easily identifiable.  On second thoughts Köstering wants you to know who is who.  The alter-egos are clearly signalled and once the literary sleuth, Hendrik, is identified as Beaumarchais, the tragic hero who kills his best friend, Clavigo, the plot thickens.

Because espresso-addict and Goethe-connoisseur  Hendrik’s personality simply isn’t compatible with that outcome, but who knows what could happen given the intense provocation to which he is subjected ….

Köstering’s Weimar trilogy, particularly this third installment, isn’t in any way high-octane.  It’s a puzzle rather than a thriller.  Köstering describes his beloved Weimar in detail (charming even in the rain) and dwells on the foibles of his characters (spelling out perhaps a little too much. I swear if Hendrik had brewed just one more expresso …).  The mystery of the disappearing actress wasn’t as obvious to solve as I have made out above, but it still wasn’t difficult. The language is everyday German rather than literary.

And yet I did enjoy Köstering’s modern-day interpretation of Clavigo, particularly the casting of Frankfurt am Main as the evil metropolis.  (Hyperbole, my own.) Why?  Because Frankfurt just so happened to be the next destination on my #gapyeartravels. (To be continued.)