I documented the 11 days I spent at the Edinburgh Book Festival over on Instagram but I’ve only written up 6 of the 30 events I attended. This weekend I’m heading to Stirling and Scotland’s crime fiction festival, Bloody Scotland. It’s time to roundup my coverage of #edbookfest 2019. I herewith present the 2019 Lizzies.

It was a combination of Donatella di Pietrantonio discussing A Girl, Returned (best book I read for the festival) and the superb interpretive skills of Lucinda Byatt (best translator) that made this event so special.

Gingko Press’s presentation of A New Divan – an international response to Goethe who was in turn responding to the original Divan by Persian poet Hafiz. A New Divan is the result of a collaboration of 60 poets and translators. The project started in 2015 and this year’s publication coincides with the bi-centennial of Goethe’s West-Eastern Divan. The event itself featured 21 poets from some 15 countries (I think).

Robin Robertson provided the most sardonic literary critique of the festival. “It’s an act of international mischief making!” he said, describing ephesusghasele, written by German poet, Jan Wagner, which he had to render in English. 23 out of 45 lines carry the same rhyme, and Robertson doesn’t use traditional rhyme in his work.

She wrote: “The best times are those spent in the company of a friend. Other times are meaningless.”

Moving from the sublime to the

Least literary and most unexpected moment (comes with a health warning)

If you’ve seen Giles Yeo on TV, you’ll know what a flamboyant character he is. Well, he was in full flow about human digestion and the difficulties of weight loss, when he pulled out a model of the human gut from his briefcase, and then proceeded to unfurl it, intestines and all, across the stage ….

Alan Power’s dismantling of the Bauhaus

Most lacking piece of advice

Having downsized from his medieval French presbytery (which housed his personal library of 35,000 books) to a small Manhattan apartment, I was sure, Alberto Manguel would have some foolproof culling tips. “I’ve only ever culled one book,” he said. “I felt it was corrupting my library”. The book in question was American Psycho. His library now is catalogued and stored in a warehouse in Montreal. He still knows where everything is and he can access it whenever he needs to.

Amazing, but no help whatsoever for my ongoing battle for living space, but there is comfort to be taken that there are folk with a worse addiction than mine. 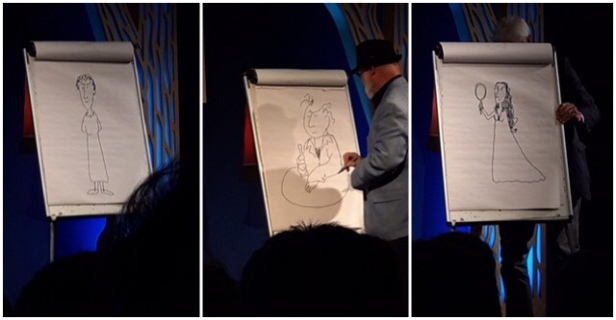 I guess he redeemed himself!

Clare Clark on Emmeline in her novel In The Full Light of The Sun: “She’s like the bottom of a women’s handbag, where you find every piece of rubbish you’ve ever collected.”

It’s always fun when authors are a little bit uncontrollable. Kevin Barry gave Peggy Hughes a run for her money, but when James Runcie shared a stage with Anna Mackmin and Nina Stibbe, who proceeded to steamroller into a very funny conversation about the 1970s (a time when kids behaved as adults and adults behaved as adolescents), and their mutual adoration of Women’s Own magazine, he couldn’t get a word in edgeways. Finally he said in his disarming way, “Sorry to interrupt. I know I’m only the chair …”

The Moment that Made The Chair Blush

Stuart Kelly is one of the most experienced chairs around. Over the years he has seen and managed everything and he can hold his own with the most intellectual of writers on any subject. But when Deborah Levy, speaking about The Man Who Saw Everything, began to talk about desire, she turned to him, stared him right in the eye and purred languorously: “And it is a powerful thing to be desired, isn’t it Stuart?” A slight spluttering, cheek-reddening moment later, a discombobulated Kelly replied “I couldn’t possibly comment.”

This is when I got to look Tim Winton in the eye. I didn’t blush at all. 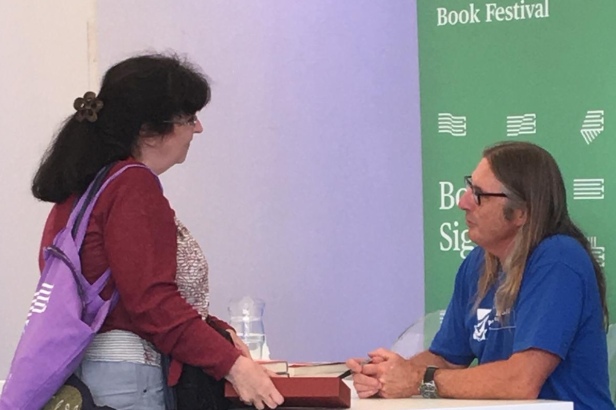 I haven’t written up Winton’s event yet. I will ….

So this isn’t my final word on #edbookfest 2019. After all I have to work my way through all my purchases. 2 weeks literary galavanting in Charlotte Square and the bookshops of Edinburgh has consequences. (I wonder if Alberto Manguel would lend me some storage space … )

Plenty there to keep me occupied until next August, when I will do it all again!