It began in the 1980s, living in Germany and the constant repetitions of Romy Schneider’s Sissi films. Sunny romantic Sissi films I should say.

Elizabeth, Empress of Austria, consort of Emperor Franz Joseph II (when she could be bothered putting in an appearance – but we’ll come onto that) is now legendary. So a trip to Vienna and the discovery of Joan Haslip’s 1965 biography The Lonely Empress while hunting for books for this years #1965club heralded the start of a mini research project.

The woman I discovered is far from the sunny Sissi of the films, which might be why Romy Schneider walked away from the film franchise, refusing to film a fourth. The woman I met was a shock and I’ll sum it up as succinctly as I can by thinking about two portraits.

The portrait by Winterhalter shows the romantic ideal, the young beautiful carefree Empress; Romako’s the older melancholy one. Except the first is a lie. From the moment she married Franz Joseph at the age of 16, the country girl brought up on the shores of Lake Starnberg in Bavaria, was never carefree, A lesser member of the Wittelsbachs, she was free to roam, ride, be a child of nature during her childhood. The constraints of the Viennese court came as a shock to which she never reconciled. She sought to escape Vienna as often as she could. Which she did increasingly as the years went by, so much so that she was hardly ever there.

Her husband loved her to her dying day and indulged her every whim. Nor were these inexpensive. Sissi had the unlimited coffers of the Austro-Hungarian empire at her disposal, and she used them for her own pleasures: expensive hunting horses, sea voyages galore, castle building in Corfu. But she was not willing to pay her dues as an Empress.

It meant that she was unpopular in her day, and an exhibit of contemporaneous newspaper articles on display at the Sisi-Museum in Vienna attests to this. It didn’t help that she was an ardent fan of Heine’s poetry, but the Viennese dislike of her was mainly due to her being the absent Empress. The Hungarians adored her; she was the biggest advocate for Hungarian causes, preferring to spend her time in the palace of Gödöllo in Budapest rather than Vienna. Actually anywhere but Vienna it seems, which makes me question her sanity.

Not in a flippant way. But it is not normal to have yourself strapped to the mast of a boat in the middle of a storm. Sissi was a Wittelsbach, the inbred royal house of Bavaria. Her cousin was King Ludwig II – a fully-fledged madman, if you believe his doctors. Her father was merely eccentric in comparison. So the propensity to madness or mental instability was in her blood. In Sissi it manifested itself as melancholy, the feeling of being a bird trapped in a (very gilded) cage, and this is a mitigating circumstance in her defence. But there comes a point, especially once one is the mother of three children, when refusing to eat breakfast with your family, because you have to watch your waistline, is no longer charming. It is petulant, vain and selfish.

Did her tragic death at the hands on an Italian anarchist on the shores of Lake Geneva redeem her in the eyes of the Viennese? I’m not convinced of that – in fact, I think the Romy Schneider films rehabilitated her reputation somewhat undeservedly. Which brings me to Anton Romako portrait of her.

What do you make of the woman in the second picture? Do you think she would have approved of us all calling her by the familiar Sissi? (See footnote) I wonder if I’m coloured by what I now know of her. To be honest, I shuddered as I stood before her intense, morose gaze. Nor can I ignore the petulance in her lips. This is a woman, who is used to having her every whim indulged, who demands absolute loyalty from her servants, her ladies-in-waiting expected to forego marriage so they can continue to serve her and her alone. Her youngest daughter, the only child she loved (by her own admission), similarly expected to be in attendance whenever her mother called …

But, before I launch a full take down on a woman, who is no longer around to defend herself, let me point you in the direction of Linda Stift’s The Empress and The Cake, which I believe contains excerpts from letters written by Sissi’s ladies-in-waiting, confirming many of my negative impressions. These are offset by a fictional narrative about an older woman and her servant, Frau Hohenembs (the name Sissi used when travelling incognito) and Ida (named after Sissi’s attendant Ida Ferency), who gradually pull a younger woman into their orbit until she is completely under their control and unable to flee. This and a startling realistic depiction of bulimia form the dark underbelly of what is both a very funny and a very informed novella. The older woman considers herself Sissi reincarnated and conducts herself with the control and imperiousness you would expect. The cage the young woman finds herself in is less than gilded, but probably of a superior ilk to the one she’d be in if left to her own devices. Frau Hohenembs is undoubtedly delusional, Ida has probably been trapped in the same way as the latest victim. But all will go well, provided they jump when the “empress” shouts jump and recognise their own subservient place in the world order. Without a doubt all three characters belong in the Narrenturm – The Fool’s Tower – continental Europe’s oldest building for the accommodation of psychiatric patients, now the Federal Pathologic-Anatomical Museum in Vienna. Also subject of the finest literary metaphor I’ve read this year. 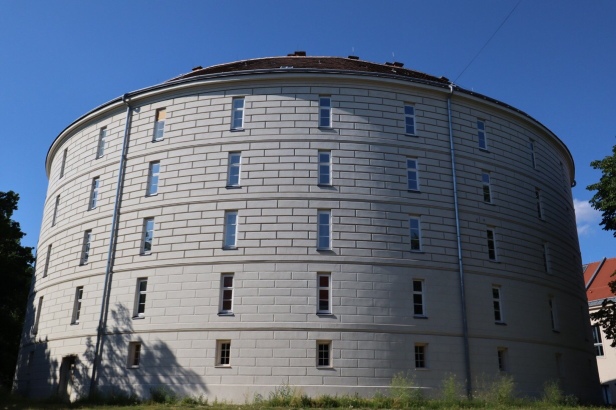 The Fool’s Tower reminded me less of a Gugelhupf … and more of an oversized springform tin in which a cake had already risen.

Phew – I needed a little light relief. The discrepancy between the Sissi legend and the reality of Elizabeth was proving a little too much.

The other surprising development was how my sympathies towards the Emperor Franz Joseph grew in direct relation to my antipathy to Sissi. If she was disappointed, imagine how he felt. “No one will never know how much I loved her”, was his immediate reaction to the news of her death. I think we get a good inkling when we consider how he indulged her, allowed her her freedom to travel around Europe as she willed, content/satisfied (though I doubt it) with the crumbs she threw his way. Rather than the lonely Empress of Joan Haslip’s biography, I now think of Franz Joseph as the lonely Emperor. I’m not usually sentimental when I visit historic sites, but I had to take a few deep breathes and collect myself when I walked passed his deathbed in Schönbrunn Palace. I’m now on the lookout for a decent biography of the Emperor. Do you know of one?

9 thoughts on “When Lizzy met Sissi”