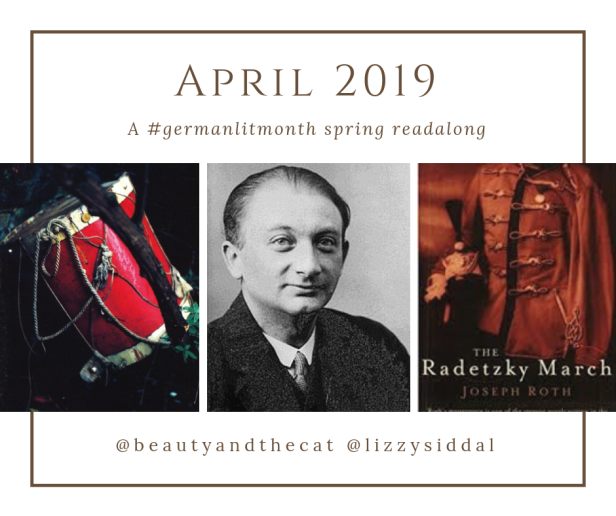 With thanks to Caroline for the discussion questions.

Are there characters you like or dislike particularly so far?

Apart from Jacques, there’s not a single character I can say I actively like! Though that’s not to say I actively dislike them all either! Again, there’s one exception to that rule too. Carl-Joseph is driving me up the wall. I should have more patience. More than likely he’s clinically depressed, but at the moment I think him more self-indulgent than anything.

On the other hand, I am sympathetic to a number of characters: the second Baron Trotta, an elderly father, who obviously loves his son, but has no idea how to show it or how to help him; the woman who thinks she’s old at the age of 41, Frau von Taussig, and the Kaiser himself. More on the last two later in this post.

What does the old servant Jacques and his death stand for?

The values of lifelong loyalty in service to another. He’s a mirror for the Emperor himself. (The clue is in his real name – Franz Xavier Joseph.) Jacques has given lifelong service to the Trotta dynasty, the Emperor to the Empire. There’s also foreshadowing inherent in the second Baron’s statement that Jacques’s death is a blow to his own survival, just as the Emperor’s death would be to the Austro-Hungarian Empire.

In many ways Chojnicki is the opposite of Jacques. What did you think of him?

I’m not quite sure what to think of Chojnicki to be honest. His vast wealth enables him to live a carefree existence and to be benevolent with it too. Lending all that money without demanding payback. because he doesn’t need to.

I do wonder why he singles out Carl-Joseph for special treatment. In order to get Carl-Joseph away from the bad influence of Captain Wagner, he organises the assignment with Frau von Taussig. Kudos for that, even if his action is somewhat cynical, particularly when Carl-Joseph is head over heels, Chojnicki disappears with her on holiday to the South. It’s as though he’s reminding Carl-Joseph that he’s just the poor relation,

Or is he simply heedless? “The fact is we’re all dead“, he says at one point, while commenting on the uselessness of serving the Fatherland. His conviction of a future doom means he sees life merely as the dance of death. Why take it, or indeed anything, including other people’s feelings, seriously?

What do you make of this quote?

The portrait of his grandfather, the Hero of Solferino, hung in Carl-Joseph’s father’s living room throughout his childhood as a reminder of the greatest moment in their family history. For Carl-Joseph, however, it hangs like a sword of Damocles over his head. He will never be able to live up to his grandfather’s reputation.

Unlike his grandfather, he causes deaths, rather than saving life. No wonder, he is so morbid. His only possessions of note fuel this attitude too: letters from his dead mistress and the sabre of his best best friend, Max Demant (also deceased). Adding to his tally are the victims of the civil unrest, shot down in cold blood by his platoon. No wonder he opened up like this to his father. Mind he was be steaming drunk when he did it. His father, though realising the truth in what he says, is bewildered and unable to help. After all, he is deep in mourning for Jacques, in need of comfort himself. That the two cannot console each other epitomises the personal tragedy of the Trottas.

What do you think of Roth’s style so far?

It’s an interesting mix. Omniscient narration interpersed with finely-crafted authentic 3rd person POV. (I forget what the technical term for that is – third person indirect, maybe). Some incredible set pieces (the Cossack riding for example). I’ve learned to pay attention and to read slowly though, because the text is quite detailed, and I wouldn’t want to whizz past a significant comment.

I mentioned the use of mirroring last week, but there’s another fine example in this section. Carl Joseph’s broken collarbone mirrors the injury of the Hero of Solferino, although there was nothing heroic in the way Carl Joseph obtains his.

There is much to admire, but one thing is beginning to irritate. It is possible to overdo foreshadowing. If I see one more reference to the death awaiting them all …… (Though I did enjoy the pithiness of quote: “Illness is nature’s way of preparing us for death” (Hofmann).

Were you surprised to find the last chapter of part 2 told from the point of view of Kaiser Franz Josef? How effective did you find it?

Not surprised at all. I think Roth set up a neat segue in the previous chapter.

This character study showed the Kaiser as an individual, not the stern monarch that everyone assumed him to be. Curtailed, almost imprisoned in his role and needing to rebel by standing at an open window for 15 minutes in the middle of the night! He is shown to be a clever, wise old man. I admire him.

He hid his cleverness in simplicity: for it is not right for an emperor to be as clever as his ministers …(Hofmann)

and I loved how diplomatically, he took the dandy, Colonel Lugatti to task.

The whole of chapter 15! There’s not a word out of place.

he felt a thirst for alcohol, which is the thirst of the soul and the body (Hofmann)

But age drew nearer with cruel and silent tread, and oftentimes in treacherous disguise. She counted the days that ran past her, and each morning the delicate wrinkles – the hair-fine mesh that old age had spun overnight round her innocent sleeping eyes. (Hofmann)

But old age was approaching with cruel, hushed steps and sometimes in crafty disguises. she counted the days slipping past her and, every morning, the fine wrinkles, delicate webs that old age had spun at night around her innocently sleeping eyes. (Neugroschel)

On the pointlessness of military life:

it struck him suddenly …. that these men with their drilled precision were dead parts of dead machines that didn’t produce anything. (Hofmann)

suddenly … it seemed to him as if the precise limbs of the men were dead components of dead machines that produced nothing. (Neugroschel)

When he meets Frau von Taussig, Carl Josef feels like he’s happy for the first time? Do you think that’s true? How do you think of her and their relationship?

She’s just decadent, Still we are in fin de siècle Vienna with all its moral hypocrisy, and she’s an aristocrat taking full advantage.

How do you feel about the descriptions of alcoholism in this section?

The quote I used above is a succinct summary as only an alcoholic could write it. Yet Roth’s also depicts Carl Joseph’s slow slide into alcoholism throughout this section. He doesn’t make a big deal it, it’s almost casual. A drink here, a drink there, a couple of glasses of the ninety-proof before roll call, and so it goes, until the man can barely function without a drink inside him, and is completely unaware of the figure he cuts.

Only Lieutenant Trotta didn’t know that his walk was becoming unsteady, that his trousers didn’t have a crease, that there were buttons missing from his shirt, that the colour of his skin was yellow at night and ashen in the morning, and that the look in his eyes was unfocused and apathetic. (Hofmann)

Carl Joseph’s slide into drunken dissipation is, of course, paralleled by Captain’s Wagner’s gambling addiction. Nor does that end well ….

Where will the novel go from here? What do you think will happen next?

Death, death and more death. Hang on, WWI is just around the corner.

Also discussed by: Andrew Blackman, Beauty Is A Sleeping Cat, Peakreads, Reader In The Wilderness