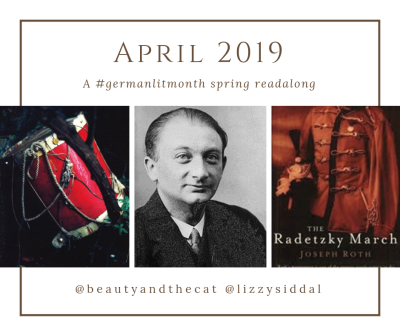 Welcome to the #germanlitmonth spring readalong of Josef Roth’s most famous novel.   Herewith my thoughts prompted by the reading questions for Part One.

What enticed you to readalong with us?

There was so much interest expressed in reading The Radetzky March following last year’s #germanlitmonth readalong of Roth’s The Emperor’s Tomb that it was hard not to organise this readalong too!

Which edition/translation are you using and how is it reading?

I’m actually using two! I read the first part using Michael Hofmann’s translation (Folio Society edition), and the second part using Joachim Neugroschel’s translation (Everyman’s Library Edition). Both translations read well, though I’ll probably revert to Hofmann for part three. The American spelling in the Everyman’s edition is annoying me! (Yes, I can be that shallow, particularly with books published in the UK.)

Is the novel living up to your expectations?

Then again, in the intervening years, I could have become a more appreciative reader. I’m not saying that I’m loving the book (yet), but this deep dive to beginning to bring its merits to the surface.

How would you comment on the first few sentences? Is this an effective opening? “The Trottas were not an old family. Their founder had been enobled following the battle of Solferino. He was a Slovene. The name of his village – Sipolje – was taken into his title. Fate had singled him out for a particular deed. He subsequently did everything he could to return himself to obscurity.” (Translation: Michael Hofmann)

Six short factual sentences, starting at the zenith, both of the Trotta dynasty and the Austro-Hungarian empire. After the enoblement of Lieutenant Trotta and the defeat of Solferino, it’s downhill all the way for both. I like the concision and the lack of flourish. The mention of Lieutenant Trotta being Slovene, also prefigures Roth’s preoccupation with the scale and diversity of the Austro-Hungarian Empire. It’s not all about Vienna.

There is also a wry wit in the phrase “return himself to obscurity”. Hofmann’s phrase is perhaps wryer than Roth’s original (Er aber sorgte dafür , dass ihn späteren Zeiten aus dem Gedächtnis verloren.) I like it though. There’s also the inherent irony, that Roth’s story is doing everything but ensure that Baron Trotta is forgotten!

Roth subscribed to Chekhov’s view that a writer “should not be a judge of his characters or what they say, but an impartial witness”. That doesn’t mean that we as readers need to be the same! How do you feel about the hero of Solferino’s crusade to return to obscurity? What are the ramifications of this for his descendants?

Baron Trotta, never comfortable with his newly-bestowed aristocratic status, is horrified at the legendary retelling of the rescue of the Emperor Franz Josef. At the time Trotta was an infantry officer but in the “legend” he represented as a cavalry officer (which now that he is a baron, he had to be. Members of the aristocracy made up the cavalry. The infantry was made up of the middle-class.) He wants the story to be told factually or not at all. The result of his efforts is that the episode is expunged in its entirety from the history books.

Whilst I admire the integrity of the man, at the same time I was advising him to let it drop. After all, to be portrayed as a hero in the “history” books is an unexpected win, isn’t it? On second thoughts, it was that kind of revisionist history that fuelled the rampant nationalism throughout the whole of Europe that ultimately led to WWI. With Roth’s omniscient narrator continually pointing to the carnage to come, perhaps the former lieutenant did the right thing (without knowing it), after all.

And so his son and grandson don’t really understand the legend, and do not question their aristocratic status. Nor do they understand Baron Trotta’s aversion to the military. Which, of course, enables his grandson to put himself directly in harm’s way.

Carl Joseph von Trotta follows his grandfather into the military. Is his life there honourable and meaningful? Is his fateful relationship with Dr Demant’s wife innocent?

I don’t think I’ve ever come across such a fish out of water as Carl Joseph. I can’t say the advantages of his aristocratic status do him any favours, except perhaps enhance his attactiveness to the other sex …. Certainly there’s not too much detail about military life in Part One. (There’s more coming in Part Two.) What I remember of Part One are the interventions of Roth’s omniscient narrator and I’d say these are scathing! Though they are, of course, fuelled with the benefit of hindsight.

The emphasis is on Carl Joseph’s love life. His seduction by Frau Slama is Roth’s Mrs Robinson moment. It’s an affair he cannot walk away from, given that it’s probably the first time in his life that he’s experienced warmth in a relationship. (The relationship with grandfather and father characterised more by respect and distance, I would say.) It also sets a pattern …

I’ve no doubt about his relationship with Eva Demant, the wife of his first true friend, Doctor Demant. She is a femme fatale, and, as we have seen, Carl Joseph has no powers of resistance. “I know my daughter! Maybe you don’t know your wife! And I know what lieutenants are like!” says Herr Knopfmacher to cement my conviction. I’m also certain that the fact of the tragic denouement being precipitated by an indisputably innocent event is supremely ironic.

Of course, Carl Joseph doesn’t pay the ultimate price for his heedless ways. Three other people do. No wonder he feels his life is littered with corpses.

Strauss’s Radetzky March is heard almost as a refrain throughout this section. What is the significance of that?

Strauss wrote his Radetzky March to celebrate Field Marshal Josef Radetzky von Radetz’s victory at the Battle of Custoza (1848). The novel begins with the Austrian defeat at the Battle of Solferino (1859). That a celebratory march is heard against the backdrop of an empire in slow decline can mean only one thing: more irony.

Roth may not judge his characters, but his sights are aimed at other targets: the social order and the military code of honour, for instance. How does Roth critique these?

I was struck by how much this section is about class and in particular the aristocratic privilege, something the first Baron Trotta is uncomfortable with, but the Carl Joseph Trotta takes as his right. Not in an arrogant way, but he is careless with it. I can forgive him the affair with Frau Slama. But the humiliation of her husband, Lieutenant Slama, and the swallowing of his personal hurt in loyalty to his aristocratic “superiors” was painful to witness.

And innocent or otherwise, why would Carl Josef compromise his one, true friend, Doctor Demant as he does. Why does he not fight the duel himself? People from lower social orders are always left to clean out his mess!

As for the military and their “cretinous institutions”. The critique is scathing, particularly of the military code of honour. What does Dr. Demant say? “I will become a hero out of sheer idiocy, bound by the rules of honour and the army. A hero!” An unwanted heroism, just like that of the Hero of Solferino. Dr Demant’s last piece of advice to Carl Joseph is to “leave the army”. There’s nothing to admired in this institution.

Set in what was very much a man’s world, what do you think of the way Roth portrays the few female characters?

Both Frau Slama and Frau Demant are seductresses; both confined by their attachment to men in the military, and so have little part to play in this niche of society. What else can they do to alleviate the unmitigated boredom of their lonely existence?

It’s been suggested that the text is misogynistic. I’m not convinced of this on the evidence so far, but my antenna is now tuned in. Let’s see how things progress.

Do you have any further comments on this section?

There’s some lovely structural mirroring.  I was particularly struck by he scenes in which condolences are offered to Lieutenant Slama and then Eva Demant. There’s an essay to be written just comparing and contrasting those.

Also the control of downward spiral. The first Baron Trotta elevated to the aristocracy, the second becoming a district administrator, the second most distinguished career in the empire, the third returning to the military, but being demoted from the aristocratic cavalry to the middle-class infantry. The slow road to perdition has begun ….

… and I’m sure that’s reflected in the portrait of the Emperor and the empire itself. I’ll pay more attention to that in Part Two.

Discussion questions relating to Part Two will be sent in time for this coming weekend.

Also discussed by: Andrew Blackman, Beauty is A Sleeping Cat, Intermittencies of The Mind, Peakreads, The Melancholy of Resistance, The Reader in The Wilderness, Vishy’s Blog

17 thoughts on “The Radetzky March Readalong: Part One”