It’s about this time of the year that I get itchy feet.  Spring beckons, and beckons, but only now – at the beginning of May – does it think about springing.  The weather has been appalling and not at all condusive to gettting out and about.   I attended the London Book Fair though, apparently during the first week in 8 years when London had no – zero, zilch – sunshine at all!  You see my point.  Fortunately the world of literature is always on hand to provide travels aplenty, and I did manage to complete my proposed circuit of the globe during the month. 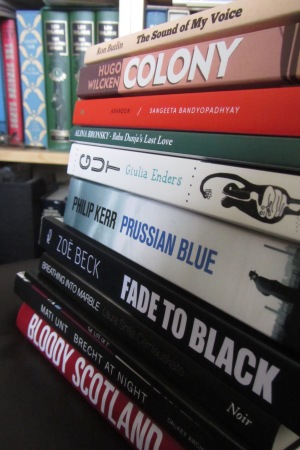 Here’s the itinerary.  Links to my reviews.

I started in Bloody Scotland. (5-stars)

Travelled through Northern England of the Brontë Era with Heathcliff in Michael Stewart’s Ill Will. (E-read. Not pictured.) (3-stars)

Visited the Baltic Countries, Estonia, Latvia and Lithuania while at the London Book Fair, and

– Chuckled aplenty at the introverted “adventures”of the Latvian writer, I.  (A giveaway comic book, I picked up at the fair.)

While in London,  I read something set there. So it was that Zoë Beck’s Fade to Black found itself at the top of the TBR. (4-stars)

Then came the diversion into non-fiction.  Health-related and needs must unfortunately.  Saying no more, but Guilia Enders, Gut, (translated from German by David Shaw) takes a very informative look at the mechanics of those body parts and functions we British don’t really like to mention, never mind talk about.  It’s funny too! (5-stars)

Next up, a trip to Russia, with Alina Bronsky’s Baba Dunja’s Last Love, currently shortlisted for the Dublin International Literary Award.  Review to follow. (4-stars)

A long haul flight next to India.  I did pick up Paul Scott’s Booker winning Staying On for the 1977 Club, but wasn’t enjoying it. I think I’d had enough comedy for one month, so I replaced with the distinctively uncomedic Abandon by Sangeeta Bandyopadhy. (4-stars)

Another long haul flight to the penal colony in French Guiliana.  Hugo Wilcken’s Colony is one of those book, bought years ago on the recommendation of a fellow blogger.  Divided into 3 sections, I found the first section to be everything that John Self promised. Full of tight writing and menace. The second section less so because I had issues with the plot, and the whole thing broke down – in comparison to the 5-star standard of the first section – when I failed to grasp the timeline of the third.  Even so not a bad book by any means.  (3-stars)

This left me with just enough time to zoom back to Scotland to complete my circuit of the globe.  A re-read of Ron Butlin’s The Sound of My Voice confirmed its place in my top 5 of all time, and an author Q&A is a work-in-progress.

Phew.  A busy month, but hugely enjoyable. I must do this (minus diversion) again sometime.

The Great Book Declutter (or is that Reclutter?) Progress Report
For the second month in a row, new books have flooded into the house.  The numbers are such that if this blog was a Youtube channel, I’d be posting an hour-long book haul!  I’m not complaining – the more books, the merrier IMO – but measures must be adopted if I am to achieve my target TBR reduction of X-60 this year.  I must stop the process of self-sabotage, as you will see.

Plans for May
So it’s time for a 6-week book-buying ban.  From now, until the Edinburgh Book Festival programme is published in early June. (Always a flashpoint for further acquisitions, and useless to resist.)  It’s not a long time, but I do need a plan.  Given that I blame the plethora of prize lists for a major part of this month’s acquisition frenzy, May will be Prizelistee Month.  I’ve pulled together the 2018 winners, longlistees, shortlistees and, in the case of the Walter Scott Historical Fiction Prize, recommended titles in my TBR, and I shall read these in no particular order.  Just as my whims take me …. and, if they take me elsewhere in my TBR, so be it.  Then May becomes Predominately Prizelistee Month.