This is a quick post just to record my reading for Italian Lit Month.  As the title of the post suggests, it’s not been smooth sailing.

The first book I read was Elena Varvello’s Can You Hear Me?, translated by Alex Valente, a much praised thriller. It began well for me.  A third of the way in I was tiring of it, two thirds in and I was annoyed, and the final third was read just to finish it.  What was the problem?

I remember many years ago taking part in a psychological study.  It involved sitting in a dark room, head hooked up to the monitor, watching random images flashing up on the screen.  Some of these were intended to shock, and they did at first.  After a couple of minutes I had seen the effect they were meant to have.  Refusing to be manipulated, I switched off.  In fact, I was yawning by the end of the ten minute experiment, much to the dismay of the poor Ph.D student whose thesis now probably needed radical revision.  He was much happier with my friend who had become quite emotional. The point is, a novel which tells me what happens in the first paragraph – my father took a girl into the woods – and then devotes one of the two narrative strands running throughout the whole novel to stringing out what happened in the woods is going to have the same effect on me.

Which means I didn’t engage with the second narrative, the story of family life with a bi-polar father.  Just wondered why the family never sought proper treatment.

What caused my annoyance though was the blurb invoking Niccolo Ammaniti’s I’m Not Scared, a novel I adore.  The only thing I found that the two had in common was the young male protagonist.  Note to self:  The I’m Not Scared comparison is a common one which promises much.  Do not be taken in again.  (See I’m not immune to all psychological suggestion – not yet, anyway.)

Wanting my second read to be exceptional I turned to the man himself.  It was time for Anna, Ammaniti’s dystopian novel, translated by Jonathan Hunt. 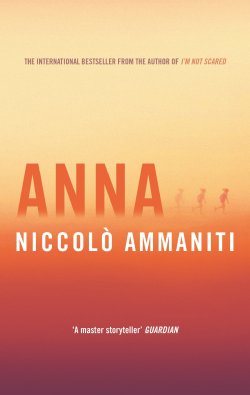 The world in 2020 has been ravaged by a virus which kills adults and children only when they reach puberty.  It doesn’t kill quickly, so when Anna’s mother contracts it, she has time to write a set of instructions for her young daughter, enabling her to keep herself and her younger brother, Astor, safe and in isolation at their home on Sicily for as long as possible.  Inevitably though, the outside world impinges, and when Astor is taken from the house by a gang of teenagers, Anna must set off in a quest to rescue him.

She meets Pietro, a little older than herself, but with knowledge of this gang.  It is a fortuitous meeting for Anna, but she doesn’t recognise her luck.  Her mother instructed her to trust no-one.  Eventually and begrudingly she recognises Pietro’s worth (even if not her growing feelings – adolescence will have its way) and they become quite a team.

Is there any hope that their fate can be avoided?  Pietro, already showing signs of the virus, has put his faith in finding a specific pair of  trainers (Adidas, three black stripes, yellow suede vamp, nut-brown sole) said to be imparted with miraculous powers.  Other rumours include powers imparted to The Little Lady, fire rituals and other bogus offerings.  Surviving children cluster together, hunt together, but Anna, Pietro and Astor decide to head for the mainland.  There are stories of adults, immune to the virus, who may be able to save them from their inevitable demise.

I found Ammaniti’s writing is as vivid as ever, with authentic detailing and grotesqueness such Anna and Astor living in a house with their mother’s skeleton appearing quite normal in this context. I liked how he included back histories for key characters such as Pietro and the savage dog, offering different starting points for the characters in the this dysfunctional world.  But this is where Ammaniti’s gondola sprang a leak. The dog’s back history was so effective, its pursuit of Anna as prey so scary, my relief that she escaped so great, that I found the dog’s subsequent transformation into the docile pet, Fluffy, with no further active role to play,  both difficult to believe and disappointing.  That said, in a world where death is unavoidable and inevitable, Ammaniti does manage to instill genuine shock and emotion when the unexpected occurs.

The question is how do you end a dystopian novel. Hopefully, bleakly, ambiguously?  I did think Ammaniti had written himself into a corner.  After all, I’ve never encountered such an effective virus.  A hopeful outcome isn’t plausible after all that has preceeded.  But a bleakly, ambiguous ending involving a special pair of Adidas trainers?  It’s clever, and definitely not bogus.

8 thoughts on “#italianlitmonth: One gondola sank, the other a smidgeon leaky”