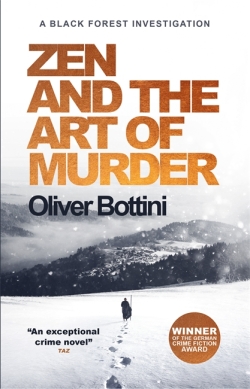 I am loving the fact that the UK publishing industry has awoken to the delights of German (-language) noir.  With a goodly number of forthcoming 2018  publications, I’m intent on reading as many as I can.  So let’s start with the novel that was published in the UK on 11.01.2018.

Oliver Bottini’s Zen and The Art of Murder  ( trans. Jamie Bulloch) is the first in a six part series, set in the Black Forest. It features Louise Boni, a middle-aged divorcée, not yet over her marriage, numbing the pain and jeopardising her career with alcohol.  Her superiors are aware of this, and only a few chapters in, sign her off on sick leave. But the case of the wandering monk has already claimed the lives of one, possibly two of her colleagues, and she is not about to let go.

A wandering monk?  Indeed, a Buddhist monk with a head injury who is wandering in his sandaled-feet through the snow-bound landscape, causing consternation to the well-heeled citizens – what if he is the start of a wave?  Louise Boni is more concerned about his head injury.  How was it caused?  And why does the monk refuse to divulge any details, especially when it becomes clear that he is being pursued by some ruthless criminals ….

So there we have some clear crime-writing tropes.  What I will say is that Bottini is not afraid to play with them.  Remember this is the first in a series. The team – the detective and side-kick(s) – need to be established.   Bottini does this in a very heart-warming way before shattering it in the first third of the first novel of the series!  Even so I found myself mourning along with Louise the wit and repartee of her young colleague.

The mystery is puzzling, replete with drama, involving international car chases and a detective who puts her life on the life.  It uses the proximity of the Black Forest to France to good effect, by introducing the issues of cooperation between French and German forces. What gives this novel an edge for me is the outstanding psychological profiling of Louise Boni and her mother.  The detective has issues not only with alcohol,  but also with her parents and a previous case, echoes of which haunt her during the current one.  The documentation of her descent into alcoholism (albeit of the high-functioning variety), the formation of every day habits and the accompanying every day denial strikes me as very true.   As does the concern of her colleagues and her superiors.  Another trope broken there.  Louise Boni’s superiors are not out to get her.  They are in her side.  She is her own worst enemy.

Neither is she the only female with issues.  Her mother is a tormented soul, not the cold fish depicted in some of the reviews I’ve read.  What if the past is so painful, that the only way to deal with it is to expunge it?  Even if that means having no pictures of your children on display.  I think the issues in the family’s past are yet to be fully explained. I expect (and hope for) further revelations in book two, A Summer of Murder, to be published later this year.

Zen and the Art of Murder was awarded 3rd place (the bronze medal?) in the 2005 German Krimi Prize.