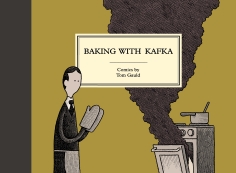 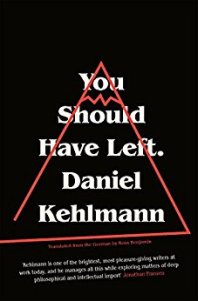 This month’s 6 Degrees of Separation, hosted by Kate, begins with a book club read from years ago, of which I remember not a word! I read a synopsis. Still nothing.   However, it appears that the novel, which contains many Mexican recipes, is also an ode to the love of food.  In that case …

… there’s nothing I love more than a German cake, but I always found that baking a German recipe in Scotland never truly worked. Classic German Baking has modified the recipes to American measures and ingredients, and they work perfectly, even on the other side of the Pond.  The crustless baked cheese cake is to die for ….

as is Kafka’s Lemon Drizzle Cake, albeit for completely different reasons!  It is presented in Tom Gauld’s Baking with Kafka.   So too is a Wolf Hall Activity Fun Book, which I would buy in a heartbeat, if ever one were to be produced.

Which brings me to Wolf Hall, surely the finest historical novel and Booker Winner ever (regardless of what happens next Tuesday).  As we know, it concerns Thomas Cromwell and his aiding and abetting, along with the Seymours, of  Henry VIII’s conquest of Anne Boleyn. Predators all, and the Seymour family seat, Wulfhall in Wiltshire,  could not have been more aptly named.

While on the subject of predatory buildings, there’s one in Daniel Kehlmann’s latest novella, You Should Have Left. I won’t say too much here, as I will be reviewing during German Literature Month.  I will say though that one protagonist has to make the ultimate sacrifice to enable others to escape.

Sydney Carton also did a far, far better thing than he had ever done before in Charles Dickens’s A Tale of Two Cities. The setting of that novel, during the French Revolution, provides the link to the final book in this month’s chain.

Fittingly, for it is the centenary of the Russian Revolution, and that is the subject of China Miéville’s latest and my current read, simply entitled October.

4 thoughts on “6 Degrees of Separation: From Like Water for Chocolate to October”