Translated from German by Peter Millar

After 1945 and 1946, the third part of my fictional exploration of post-war Hamburg reaches the bitterly cold winter of 1946 and the torridly hot summer of 1947, which seemed designed to inflict further suffering on the population of the devastated city. 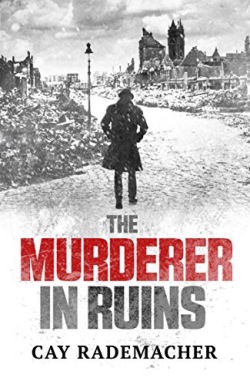 The Murderer in Ruins, as ice-cold as the landscape,  is killing people and leaving their naked bodies amidst the rubble of Hamburg.  There are no identifying marks. Neither are there any reports of missing persons.  Not as strange as it sounds, given that Hamburg is full of displaced persons with little to no connection to the surviving home population.  The unfortunate chief inspector Stave is tasked with finding the killer, aided by the British officer, Lieutenant MacDonald, but where to start?

Based on a real case in which the four victims remained as unidentified as the killer, Rademacher’s novel reflects the frustration of a case with no leads, no clues in a city trying to reestablish the rule of  law.  After all, given recent body counts, what difference do 4 more bodies make?  The reader must be patient – very patient – as each assumed lead draws a blank.  But, as the author explained at Newcastle Noir, he has reconstructed the case fictionally in order to provide his own solution.  And so the resolution, in which the crimes of the present are inextricably linked with German crimes of the past,  depends on a chance observation ….

I admit, as a thriller, I struggled with the tortoise-like pace of the investigation, but, as a piece of historical fiction, I was bound by the detail of Rademacher’s reconstruction of post-war Hamburg and the psychologies of the characters. Stave, himself, is damaged goods, having lost his  wife in the fire-bombing of Hamburg, and his only son to the Nazis and the Eastern Front.  Despite their ideological estrangement, the father loves his son, desperately combing Hamburg main station for him whenever a train arrives with soldiers returning from the war.  His anxiety is palpable and can only increase when he discovers his son is a POW in Siberia ….

I found Stave a very sympathetic character.  Hamburg is, despite the weather, a hot bed of vice and black-marketeering, and he is a man who understands the importance of overlooking petty crimes to prevent being deflected from the main chase. However, racked with guilt about his wife, anxiety about his son, he is in need of a break. And in Anna, a mysterious aristocratic refugee and skilled black marketeer from East Prussia, it would appear he gets one.  It’s a relationship that seems destined for  greater things, if only he can forget that she tells him nothing of her past … 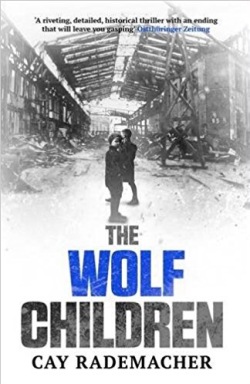 The exploration of East Prussia and the people who fled to avoid the “Ivans” is continued into the second novel of what will be a trilogy.  The Wolf Children is the collective name given to the mass of child refugees who flowed westwards.  Either orphaned or separated from their parents during the mass exodus at the end of the war, they lived a feral existence in Hamburg, learning to capitalise on opportunities presented by the black market or to engage in child prostitution.  They had their enemies and there was plenty of gang in-fighting,   So when the body of a teenage boy is found lying on top of an unexploded bomb in the harbour area of Hamburg, it is assumed that he is one of them.

Inspector Stave’s second case is a little easier than the first, in that he does at least identify the corpse.  Otherwise the waters are as murky as those of the Elbe, with his prospective Wolf Children witnesses being killed almost as soon as he has talked to them.

Once again I didn’t find the case as enthralling as the social history it explored. The identification of the murderer is quite well-signposted although the motivation for the boy’s killing would be utterly unbelievable if it wasn’t based on obscure historical fact. The things we do not know! Rademacher’s vision for these novels is greater than the murder mystery, and I would say that the scope of this second novel is to investigate the impact of war on the younger generations.  It is quite heartbreaking in places – no more so than in relation to Chief Inspector Stave’s son.

The war may be over but the repercussions are severe.  The world remains fractured, its logic twisted.  Why else could nothing and nobody function without the black market and what are the British occupation forces doing dismantling the remaining machinery at Hamburg docks?  This can hardly be called peace. Personal relationships are suffering also.  Like the temperatures of the summer of 1947, resentments are rising.  Where is this heading?  I can hardly wait for the third instalment!