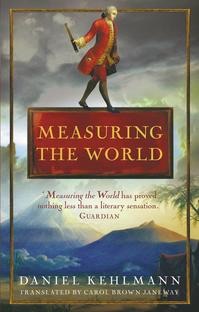 I’ve never been happy with my review of Kehlmann’s Measuring The World from nine years ago. I always felt that I had been blindsided by the humour of the piece; that I hadn’t got to the core of things. In the years since, I have heard Kehlmann referee a translation duel and speak of the style he used – everything in indirect speech, putting a distance between reader and subject, endowing the action with a cinematic quality. I must read it in German, I thought. I still haven’t done that. However, as my second reading of Carol Brown Janeway’s fluid translation immediately followed my reading of Andrea Wulf’s The Invention of Nature, I returned to Kehlmann’s novel with fresh eyes.

But firstly let me say that Measuring the World has, in the intervening years, has lost none of its charm or entertainment value. It remains an absolute humdinger. However, knowing much more about the obsessive Alexander Humboldt gave me a better insight into Kehlmann’s talents. It is the historical novelist’s job to

a) show us the human reality that the historical record glosses over. Such as how impossible Humboldt must have been to live with. Poor Aimé Bonpland takes the brunt of this for 5 years in the South America wilderness. The man deserved a sainthood! Gauss, too, a curmudgeon, best left alone with his head in the clouds of higher mathematics.

b) condense the lives of the two greatest scientists of their time into just 260 pages. Their differing backgrounds, their radically different modus operandi, nothing to share but their genius and an incredible number of discoveries.

But to do so artistically, in a new, a novel way. I’ve already commented on the humour. Kehlmann also uses structure to good effect, starting his novel at the only time when the two men met before looping back into the past to tell their histories in parallel. (Demonstrating from the offset, the Gaussian theory of parallel lines meeting?) The literal highpoint of Humboldt’s career at 18,690 feet, at the point where a ravine stops Bonpland and himself from climbing to the summit of Mount Chimborazo. This episode occurs dead centre in the book. Not that everything was downhill for Humboldt after that, but he was never to experience the same exhilaration.

A novelist can also use poetic licence, concatenating events, perhaps even changing them for dramatic effect. I’m now suspicious of the electric eel adventure I highlighted in my first review as Andrea Wulf tells it differently. Humboldt and Bonpland sent horses into the pond of electric eels. Kehlmann emphasises how they used their own bodies. Which made me a little suspicious of Eugen Gauss’s calamitous experience in Berlin. Great for the novel but life surely couldn’t be that cruel? Facts, it seem, are somewhat different. Not that this detracts in iota from Kehlmann’s telling. Historical novelists are not oath-bound to tell the truth!

And so to the 2012 film starring Florian David Fitz as Gauss and Albrecht Schuch as Alexander von Humboldt. Interestingly Gauss taking centre stage on the DVD jacket. An indication that his story (the poor kid made good) was the more interesting and coherent on film. Humboldt’s more panoramic storyline more difficult to convey when confined to short episodic bursts. Some of these scenes, such as the hallucinations on Mount Chimborazo just didn’t work at all. That said, the film is a visual treat and the overlay of a narrator, not only necessary to hold it all together, but also a nod Kehlmann’s indirect narrative. A word of warning though. Watch only if you are a German speaker as half the English subtitles are missing!

My thanks to TJ at My Book Strings. Her choice of Kehlmann’s Measuring The World as #4 of 12 Germans for 2016 gave me the necessary push to revisit an old favourite. TJ’s review is here and Naomi at Consumed by Ink has also joined in here.

10 thoughts on “Book to Movie: Measuring The World – Daniel Kehlmann”