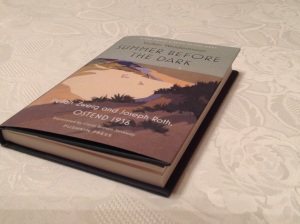 Was it worth the anticipation?  Yes, yes and yes again!

(Editor: Calm down, Lizzy, you’re meant to be reviewing – not gushing.

Lizzy takes deep breathes, and works out how to write the piece without the adjectives, wonderful, fantastic, superlative, etc, etc.

I’m tempted to leave it there, with an invocation to every fan of Stefan Zweig, Joseph Roth and Irmgard Keun to go out, grab a copy and read it now.  Do the same, even if you’re not. You won’t read anything more illuminating about these writers or the extended community of artistic exiles that congregated in Belgium in 1936.  Nor will you read anything faster.  I sat down intending to read just the first chapter.  Next time I looked up, I had turned the final page. (168)

The summer of 1936 was a time for reflection, for working out what to do now that doors were closing in Nazi Germany.  Putting a brave face on it, enjoying the summer, each other’s company in the Café Flore, plenty of drink and a passionate, if extremely puzzling love affair (Roth/Keun).  Their worlds may have been falling apart, yet still they found the wherewithall to write literary masterpieces.  The supportive and collaborative community they formed that summer enabled that.  Weidermann shows how that community came to be, the dynamics involved and just how that period was the summer before the dark.

As a long-time Zweigette ( 😉 ), I offer this book as an antidote to the venom of that article written by Michael Hofmann. (See footnote.).  Yes, Zweig was a multi-millionaire, some of it inherited, most of it earned by his writings.  (He was the best-selling author in the world during his day.) Of course, this gave him a position of privilege.  Yet he used his wealth to support many less fortunate – such as Roth, who he bankrolled for 10 years.  (Think of all the masterpieces that wouldn’t have existed for Hofmann to translate, had Zweig not done that.)

Lizzy: Sorry, Ed, but 6 years later, to the day, I am still outraged.)

The point I’m making is that Weidermann’s portrait of Zweig is sympathetic, a response to those who think him insincere, or a non-entity in terms of world literature.  In fact, Weidermann shows how much of a hand Zweig had in the some of Roth’s work.  (And vice versa.)

Now for a confession.  I’m not particularly fond of Roth or Keun as writers.  This statement is based purely on having read a single book by each: The Radeztsky March and The Artificial Silk Girl. But having now “met” the people behind the pens, I’m curious to read more, particularly the books they wrote during that summer of 1936: Roth – Confession of A Murderer; Keun – After Midnight, and, of course, Zweig – The Buried Candelabrum. Also Britta Böhler’s The Decision, a contemporary novel about Thomas Mann, who at this time in 1936, had not yet made his stand against Nazi Germany, and was ridiculed for it by the exiles in Ostend.

(Editor: Lizzy! I commissioned a review, not a reading list!

Lizzy: Sorry Ed, I don’t know how to review non-fiction without simply reiterating book content, and this book is so much more than a stand-alone read for me.  For a while I’ve been intending to delve deeper into the literature of this period. I have found my springboard and I shall be diving in for the rest of the year.  But as you insist on a final verdict ….. )

Absolutely fab-u-lous! (A modest amount of gushing is allowed, isn’t it?)

(Footnote: I refuse to link to it but search for Vermicular Dither if you must.)

8 thoughts on “Summer Before The Dark – Volker Weidermann”