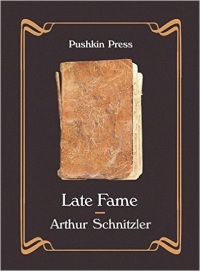 I have been collecting handsome Pushkin Press softback novellas for years, but 2015 saw exciting developments.  Firstly, selected titles have been given the hardback treatment  (and long may that continue, despite the objections of my bank manager).  Secondly Pushkin Press have just published a NEW Schnitzler in hardback.

A new Schnitzler?  How can that be when the man died in 1931?  Therein lies a tale involving the saving of his archive from the Nazis by the British government in 1938 and its subsequent storage at Cambridge University Library.  Thereafter,  Late Fame, which Schnitzler felt was ready for publication in 1895, lay indiscovered until its eventual publication in German as Später Ruhm in 2014.  Pushkin Press moved swiftly to publish this English translation by Alexander Starritt in 2015.

This is a delight for any literature lover and food for thought for any writer who hasn’t hit the bigtime.

In his youth, Eduard Saxberger wrote and published a collection of poems that sank without trace.  In his old age, a group of young Viennese writers, members of the “Enthusiasm” society, discover his genius and persuade him to join him in a literary recital.  At first, he is reluctant, but their flattery and yes, enthusiasm, finally elicit a promise from him to pen a new poem for the occasion.  At which point his troubles begin ….

It was over. At heart it was simple and not even very sad – no sadder than age itself, hardly sadder than the thirty years in which no verse has ever occurred to him.

His muse has vanished. A new poem proves impossible. Much to the disappointment of the group, they must settle for the original poems, which become the centrepiece of the recital. It is the moment of Saxberger’s greatest triumph and yet ….

The ovation roared around him. He bowed several times, turned to the door and then, just as the clapping was getting weaker, he heard a voice: “Poor devil!”

There’s a comment guaranteed to take the gloss off the evening and much more besides.  As Saxberger’s new image of himself slowly unravels, Schnitzler’s tale comes into its own.  Which is only to be expected of the astute pyschologist.

At face value this is the story of man being given a second chance.  In reality, its subject is  a man at risk of losing  all that he has gained: community, contentment and self-respect.

In addition, Schnitzler depicts the Viennese café society of which he was an intrinsic part – including his own close circle.  These portraits are not always complimentary, although there is  a very sympathetic study of the young Hugo von Hofmannsthal.  And if the real people are identifiable these days –  the afterword in this edition names them – then perhaps it was for Schnitzler’s best that his novella took 120 years to find some late fame of its own.