From the moment the programme was published, I knew the 8th AyeWrite festival was going to be fun. It seemed much more diverse and far less parochial that in previous years. I don’t remember ever wanting to attend 5 events on the same day before.

This post will focus on the 3 fiction events- leaving the non-fictional subjects to be dealt with at a later date (when I have read the books). 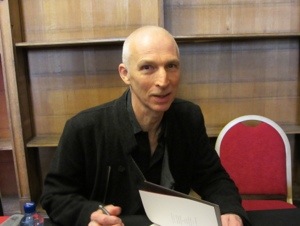 We start at midday and are transported to 17th century Florence and the life of Zumbo, the infamous-in-his-lifetime master of the wax figure. Rupert Thomson described the moment when the idea for his novel, Secrecy, began to germinate in his mind. At the recommendation of a stranger, he visited the Specula in Florence, and was astounded by the anatomical wax figures he found there: Minute wax tableau, the figures can fit on the palm on the hand, depicting, depending on your outlook, death and putrefaction, or love of the lost beauty of life. Astounding figures, said Thomson. The life-sized models even more so – macabre, yet quite beautiful, with a sensual sheen on the skin, a cross between the anatomical and the erotic.

He discovered them in 2000 (he remembers it well, there is an accompanying story of personal trauma), spent a goodly number of years researching Zumbo’s life, and discovered the perfect subject for a novelist – enough facts to give a structure but plenty of space for his imagination. Zumbo left Sicily at the age of 19 and never returned. He left under a cloud due to an “irksome incident”. This is alluded to in Secrecy, the first of many secrets, not all factual, not all answered. The novel mixes history with fiction in the same way as Zumbo mixed his waxes – one shade blending into the next with no discernible edges. This is a smooth read, seemingly effortless writing … Not a bit of it, there were 10 drafts.

Thomson is a perfectionist. The challenge was to make his story fit history and, frustratingly, he was still discovering new facts after the 6th draft. Plus, said Thomson, there was the challenge of producing a text that mirrored the contradictions within Zumbo’s wax figures and the historical figures at the Florentine court: the powerful Grand Duke who was more suited to the priesthood, his contemptuous wife, who eventually was sent to convent and, of course, Zumbo, himself- a man, with enemies, trying to make himself invisible in order to survive.

Thomson is more than equal to the challenge he set himself. 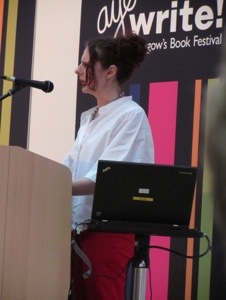 Maggie O’Farrell takes us back to a time within living memory – the now legendary heatwave of 1976 – which I remember all too vividly because of a migraine that went away only when the weather broke and the rains came bucketing down. (How my weather sensitivities have since changed). This is not the book she intended to write. It’s just that she kept hearing snippets of a bickering family and that family, the Reardons, just wouldn’t shut up, The heatwave came into focus thanks to that unpronounceable Icelandic volcano. People in London behaved very strangely, said O’Farrell when their delusions of being in control were made manifest. So too, the Reardons.

It’s boiling outside and tensions are certainly simmering in the Reardon household. They have been for years, although the disappearance of the father, who simply pops out for a paper one day and doesn’t return, ups the ante somewhat. The adult children return from their now separate and not entirely successful lives to the nest to support their mother. While they are trying to solve the mystery, all kinds – and I mean all kinds –  of skeletons emerge from the closet. The question is will the crisis bring them closer together or fragment them beyond the point of fixing?

For me, the strength of this novel lay in the small details, inserted at times casually into the text and which rendered it totally authentic: the smugness of a mother whose adult children return to her; how a conversation can turn into a fight through one mis-inflected word; a child immersed in driving toy toy cars down the cracks in the lawn; the behavioural patterns of a dyslexic, survival strategies to them, strange and alienating behaviours to others. The big reveal, however, struck me as implausible. Still, the ending, understated and well-timed, made me cry. 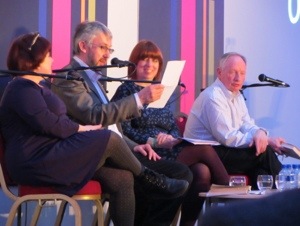 The final event of the day was a celebration of the works of Muriel Spark, particularly those she published 50 years ago in 1963, 2 years after The Prime of Miss Jean Brodie, the debut novel that made her a millionaire but which overshadowed everything she wrote thereafter. The four panellists read from her novel The Girls of Slender Means, a couple of short stories, The Thing about Police Stations (utterly marvellous!) and The Gentile Jewess as well as a scene from her only play, Doctors of Philosophy and a poem entitled On the Lack of Sleep. They followed this with a discussion extolling Spark’s virtues.

I almost inserted the adjective alleged there. You see, while I love Jean Brodie, I absolutely detested A Far Cry from Kensington when I read it a couple of years ago and I doubted I’d read anything by her again. This has puzzled me, given that I’m a great fan of Dorothy Parker’s ascerbic wit. So in the spirit of the event, I did read The Girls of Slender Means and, while not entirely bowled over, I have pondered and am in the process of uncovering depths that don’t reveal themselves with a superficial quick read. Plus last night’s event – particularly The Thing about Police Stations – is working on me. If there’s ever another Muriel Spark week in the blogosphere, you might find me joining in.

Secrecy – Rupert Thomson ***1/2 / Instructions for A Heatwave – Maggie O’Farrell  *** / The Girls of Slender Means – Muriel Spark *** for now. Rating likely to rise once I have pondered some more.