As German Literature Month moves into genre fiction week, I’m delighted to introduce Sally-Ann Spencer, whose translated oeuvre is to be found mainly on the genre shelves (real or virtual).  We can argue later whether that should be true of her latest, Juli Zeh’s The Method, published in the UK in July 2012. 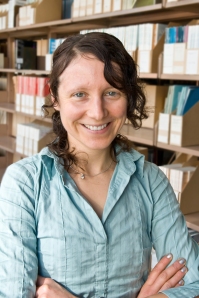 1) How did you become a literary translator?
I think this is the story for many literary translators, but it happened entirely by accident. I was working in publishing and we were looking for someone to translate a book from German. In the end, I started the job myself and discovered that I enjoyed it. For several years I translated in my spare time, but then I took on a 992-page novel and it became a full-time job.

2) Is your specialism in translating genre fiction self-chosen and influenced by your own reading preferences?
Again, this was more accidental than planned. My first big translation project was an environmental thriller, and after that I was offered a psychological thriller, followed by a fantasy novel. I guess the question as to what constitutes genre fiction is quite fraught, and I’m not sure I’d thought of it as my specialism. Mostly I read literary fiction (I’d count The Method in that bracket) but I read heaps of fantasy novels while I was translating The Dwarves.

3) What are the particular challenges of translating genre fiction?
It’s important to understand the conventions, of course, but that’s probably true of anything you translate. Different books come with different challenges. I had great fun dreaming up new names for the fantasy creatures in Markus Heitz’s Dwarves novels. On the downside, the length of the books was really testing. It’s difficult to hold 600+ pages in your head simultaneously, and you can’t read the script from start to finish in a single sitting, which I like to do in order to check consistency and tone. Translating the second volume in the series was even trickier as I had to keep thinking across both books. It’s also odd translating something that you know will have further instalments as you can’t predict the difficulties that a particular choice of word might create in future books!

4) You’re based in New Zealand – does the distance from Europe have any negative impact on your job or lifestyle?
Ah, it’s difficult to complain about the New Zealand lifestyle! Wellington is a really beautiful city, and life here unfolds at a slower pace than in the UK. With the Internet and email, you can translate from pretty much anywhere in the world. Initially, I felt a bit isolated, which is one of the reasons that I started a PhD at Victoria University, which has a centre for literary translation. Since then I’ve translated a couple of children’s books for Wellington-based Gecko Press and I’ve worked on a German-flavoured issue of the New Zealand literary journal Sport. Getting to know other people interested in translation here has been great.

5) Which of your translations gave you the most pleasure and for what reason?
Translating The Method was a wonderful experience for me, not least because I’ve always admired Juli Zeh’s work. I also had the opportunity to attend a workshop in Germany with the author and her various translators working in other languages. I’ve written a bit about that here.

6) Which is the longest work you have translated and how long did the translation take? Did you still like the book when you had finished the translation?
Frank Schätzing’s The Swarm comes to 992 pages in German but the volumes in the Dwarves series also run to 600+ pages, so it would be fair to say that I have indeed translated some very lengthy books. I spent about a year translating The Swarm, which included lots of time researching the factual elements of the novel – everything from the layout of Vancouver Aquarium to the science of freak waves. If you work with a book so intensely over such a long period I think you can’t help but like it – although ‘like’ is perhaps the wrong word. Maybe it simply becomes part of you. I still surprise myself and other people with odd facts about methane hydrates, annelid worms and oil rigs that somehow embedded themselves in my mind while I was translating Schätzing’s novel.

7) How did you become Juli Zeh’s translator?  What’s it like to follow in Christine Lo’s footsteps?
I’ve been a big fan of Juli Zeh’s work ever since Spieltrieb. Her German publisher and her British editor knew about my enthusiasm and gave me the opportunity to translate The Method, which was hugely exciting. It’s strange to pick up the work of someone who has previously been translated, particularly in the case of a writer like Zeh who has such a distinctive style. In the end I decided not to look at the previous translations, which I think perhaps is the only way. Later I read Christine Lo’s Eagles and Angels and Dark Matter (which I also love in German and in English) and it seemed to me that her voice was recognizably there in all three translated novels, which was what I had been hoping for.

8) Which 3 works of German literature would you take to the proverbial desert island and why?
Thomas Mann’s Der Zauberberg (The Magic Mountain), Robert Musil’s Der Mann ohne Eigenschaften (The Man Without Qualities) and Juli Zeh’s Spieltrieb (as yet untranslated – I’m waiting for the call!). All three books are nice and long, wonderfully written and full of ideas, and I’m happy to read them over and over again. I might also take some comfort from the snowy surroundings of The Magic Mountain when I’m being scorched by the sun.

9) You are allowed another book to take for translation purposes. Which would it be and why?
Actually, this is something I’ve thought about previously (probably when I was supposed to be doing something else) and my answer was going to be Arno Schmidt’s hugely complicated Zettels Traum. It seemed like a suitably impossible project for an indefinite stay on a desert island, but I recently heard that John E. Woods has nearly completed an English-language translation. Obviously, I could still embark on my own desert-island version, but it rather undermines the idea of it as an unachievable goal that would occupy me forever.

10) Perhaps I could then persuade you to take Uwe Tellkamp’s 1000-page German Book Prize winning Der Turm?  I’m far too lazy to read it in the original.
Ah-ha! I bring good news…. Tellkamp’s novel is being translated into English as I type (http://frischand.co) by a poor translator, who probably isn’t marooned on a desert island. I think it would be a tough one to translate!