When truth is stranger than fiction, there’s no need to make anything up.  But it seems there are as many ways to write a fictional biography as there were authors appearing at the EIBF last week. 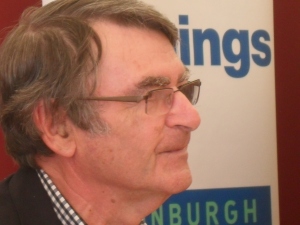 David Lodge, whose fictional biography about the celibate Henry James Author! Author! I enjoyed very much, has now turned his attention to the distinctly non-celibate H G Wells.  There’s no excuse for inventing characters, he said.  The novelist should keep to the facts as discovered and use fictional methods to fill in the 90% of a life that remains unrecorded.

In A Man of Parts his subject is H G Wells.  Before I went into the event, what did I know about him?  That he wrote some excellent science fiction …. and that A S Byatt despises him!  She was quite adamant about this at last year’s EIBF, claiming that the man callously destroyed Rebecca West’s life.  It became clear that Lodge has a different view. Wells’s views about free love were well known and, despite it,  the women pursued him, he claimed.  His second wife condoned and collaborated with him and the fact that Wells maintained a good relationship with his women confirms that he wasn’t really a sexual predator.  Lodge wrote the novel to correct some of the prejudices that are held against him. I suspect there may be a gender divide in reaction to Wells’s behaviour.  The jury that comprises of me is still out. 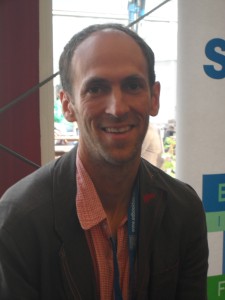 Benjamin Markovits’s rule for writing fictional biography runs thus: Never include anything just because it is true!  There’s also no doubt about how Bryon would be judged by contemporary standards.  A paedophile , sexual predator and statutory rapist, to use Markovits’s own words.  Yet we should judge him by the standards of his own time – there’s a disjunction between his mores and our own,  said Markovits, and I was interested in finding out what made him the way he was.  Let us remember that Byron was more ravished than anyone since the Trojan war! In order to explore this, Markovits has in Childish Loves built a complex novel with multiple levels of narration.  Byron’s story is told in parts by himself in letters and by a sexually repressed Peter Sullivan.  There could be no greater contast between narrators.  Sullivan’s story is told by a fictional Ben Markovits, a married man who represents the middle ground.  This was difficult to achieve said the real Markovits, I had to tell my wife everything that my fictional alter-ego was doing, particularly as he too is married to a Caroline.  It got tricky when I was contemplating having a fictional affair.  I found that because I had used my own name and hers, I couldn’t simply embark on a string of affairs.  Thinking of infidelity and the pain that it would inflict on a marriage was drama enough.

Byron wrote his own memoirs. What can you as a novelist add to them?, asked chair James Runcie.    I can use Byron’s voice and add Austen’s craft to establish a narrative, a scene, flesh out a character, replied Markovits. 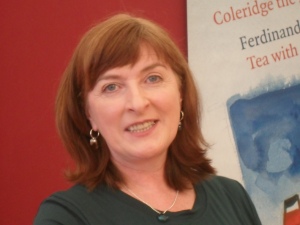 That sentiment was echoed by Janice Galloway as she talked about the second volume of her autobiography/fictional memoir – All Made Up. This is the story of her adolescence, a time when music and boyfriends and Latin were vying for prominence.  Life doesn’t write itself in paragraphs! was her mantra.  So what if the events are real?   I have applied novelistic techniques to impose a structure on them, to address universal issues and to draw out and emphasise human characteristics. I have changed names to protect both the innocent and the guilty because a lot of these people are still alive and my publishers would be very concerned about potential slander.  I don’t know and neither do I care what the real people behind my characters think about what I have written.  I am resisting the word memoir for two reasons.  1) To placate my mother and 2) in Scotland, it is the eight deadly sin to talk about yourself.  Memoir is me followed by moi.

It’s up to the reader, therefore, to determine what’s all made up, though probably not as much as the title would have us believe.  Dear God, said Galloway, if I could not remember all this, I would. 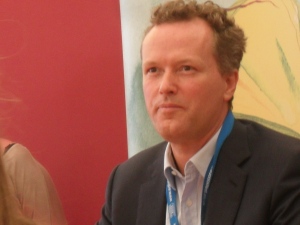 The blurring of fact and fiction is completed in Edward St Aubyn’s melrosiad, a cycle of 5 novels in which the main protagonist, Patrick Melrose relives St Aubyn’s traumatic past.  The story has just been completed with At Last.  Why have you written this as fiction?, Lisa Allardice asked.  I didn’t want to write a confession in the style of Rousseau or Augustine, replied St Aubyn.  I want to explore the dramatic truth of events within my own life.  It’s pointless writing a novel unless you discover something new, particularly when you don’t enjoy writing them, he said.  The idea of the novels is for Patrick to sublimate his anger. To become free of his past. He’s not out for revenge.  Asked if he had any misgivings about using his family history in his novels, St Aubyn emphasised the need to behave ethically, yet he argued all novelists use their own experience to some extent.

The difference is, to quote both Lodge and Markovits, how the novelist decides to play the game.  It will be fascinating assessing the effectiveness of these choices, as I make my way through these novels/memoirs/(auto)biographies this autumn.

Other blog reviews:  Janice Galloway at 12 Books in 12 Months

One thought on “420 Hours in Edinburgh: Fictional Biography”