I don’t know how he does it. Stuck-in-a-Book has come up with another great meme.  Perfect for Sunday Salon chatting.

1) The Book I am currently reading

Well, I actually have 6 books on the go.  Books that I’m reading slowing, snacking on between meals if you will such as 50 Literature Ideas that You Really Need to Know About and a Rilke Anthology.  Others that I am taking a break from because a) the experience is too intense – Georg Letham:  Physician and Murderer and b) The Tin Drum because I’m waiting to see the film which is based on parts one and two before I read part three.  (Actually I’ll give up on waiting on the DVD to drop through the door – I’ve been waiting over 12 months so far.) 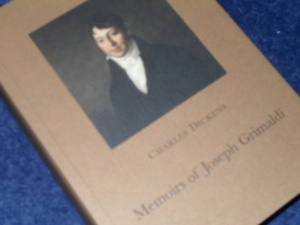 This coming week, I’ll be concentrating on Memoirs of Joseph Grimaldi by Charles Dickens as I’m reading it for the next Classics Circuit and am due to post on 20th May.  Details of book number 6 in section 3 of this post.

2)  The Book I finished last

Tea Obrecht’s The Tiger’s Wife is an ambitious debut novel.  Very well written and successful in that it is currently shortlisted for the Orange Prize.  Yet I found it puzzling and struggled to finish it.    I was wowed during the first third, my interest waned during the second – entirely due to my lack of understanding for the magical realist elements.  Sheer bloodymindedness made me pick up the book (after a two book interlude) to complete the final third.  Unfortunately I still don’t get it and the reading group questions at the back aren’t helping.  I need to read some reviews and, should a blinding flash of light impart some understanding, I may write a full review.

Edit: No need to write that review now that The New Dork Review of Book has written this. I agree with every word.

3) The Next Book I want to read 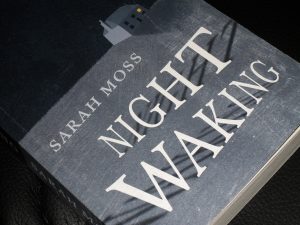 The Scottish Islands are in my mind at the moment and so, I’ve finished the Dickens, I will concentrate on Night Waking by Sarah Moss, which is set on the island of Colonsay.  I read the cracking first chapter during my day trip to Arran last week and am looking forward to losing myself in the rest.

Sssssh – don’t tell Rossetti but I had a 22-book binge at The Book People yesterday.   Avoid their current catalogue if you’re trying not to buy books.  I made the basic error of taking “just a peek”  on Friday night and ended up checking out with 22 books for £26 yesterday.  But how can you say no?  More to the point how do they do it?

Those books aren’t here yet, which means that I can now enthuse about The Hummingbird Bakery Cake Days.   I bought this about 3 weeks ago and so far have baked the feta and ham muffins (7/10), the lemon meringue cup cakes (8/10) and the absolutely divine chocolate and lime cheesecake (10/10).  The best cheesecake I’ve ever eaten was a raspberry and white chocolate confection from The Cheesecake Factory in Huntington Beach, California.  There’s something about American cheesecakes that has remained elusive to my homebaking  … until now.  This book tells me how to make them and I’m going to try them all:  chocolate, caramel and hazelnut;  pumpkin (yes!);  strawberries and cream;  summer fruit. Yum!  Yesterday a friend gave  me a bag  of rhubarb from their back garden and so I’m writing this post with the heavenly smell of rhubarb and almond loaf wafting through from the kitchen.  It’s cooling as I type ….

The book is also currently on offer at The Book People for the crazy price of £6.99! (But you didn’t want to know that, did you?)

5) The Last Book I was given 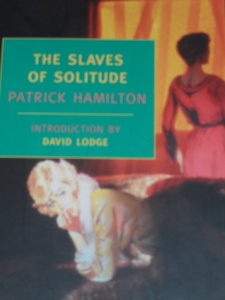 Well, I give myself books all the time ( 🙂 ) as do publishers (and very grateful I am too!) But the last time  an individual, other than myself,  gave me a book was back in February when the lovely and ever generous Frances from NonSuchBook sent me (and a few other UK bloggers) a selection of NYRB classics.  I was fortunate to receive Patrick Hamilton’s The Slaves of Solitude.  Hamilton is very well thought of in blogland though I have yet to read him.  I must get round to reading this sooner rather than later.

8 thoughts on “TSS: The this-book-and-that meme”